“We are hopeful despite these despicable attacks” 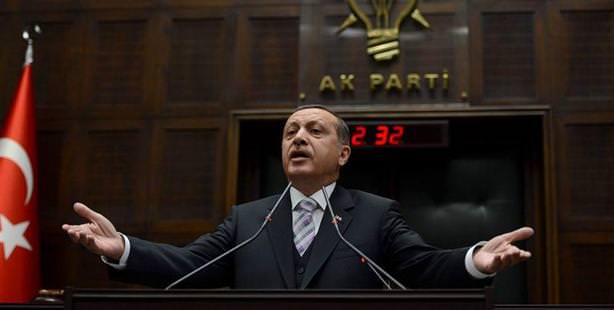 "Nobody can make us surrender. We did not take a step back in the face of any attack, we will not take any steps back," Prime Minister Erdoğan told his ruling AK Party in parliament in the capital Ankara. Erdoğan also warned of possible provocation during Thursday’s funeral ceremonies for the three female PKK members murdered in Paris last week.

Prime Minister Tayyip Erdoğan addressed the ongoing peace initiative with the PKK in an effort to end terrorism and the recent killings of three Kurdish females in Paris during his speech for the AK Party Group parliamentary meeting held on Tuesday. "Despite all attempts at provocation and despicable attacks, we have not lost hope for even one second, we are hopeful. Let us all together put an end to this game," stated Erdoğan who went on to deliver the following messages:

"As citizens of the 75 million populated Turkish Republic, we are a nation that has always roared against any sort of attack on our freedom and liberties. And today, nobody can make us get down on our knees and surrender.

For 30 years now our heroic soldiers have been martyred and terrorists in the mountains rendered ineffective. A bullet, no matter whom it is addressed to, ends up going to mothers in tears. For ten years now, we have been trying to put an end to the pain suffered by these mothers and by in no way disrespecting the memories of their loved ones in the process.

While some lament from suffering the harshest torture in the dungeons of Diyarbakır, we also perished in Turkish prisons. However, the thought of taking up arms never once crossed our minds. They struck and we grew, we gained strength. And here we are today. This is because violence and terrorism is a dead-end road.

Violence and terror has brought nothing to this country but pain, blood and tears. Believe me, we have one goal: that is to halt the mothers' tears. That is why we are calling for this project of national unity and brotherhood. Even if we remain on our own, we have never taken a step backwards and we never will. Despite attempts at provocation and despicable attacks, we have not lost hope for even one second. We are cautious and careful during this period, but also hopeful. We will overcome all attempts at provocation and sabotage to reach the end of this process.

If there is anyone who wants to truly take on a constructive role in this process, then whomever they may be, I am calling on all of you. I am calling on all NGO's and all media groups to say that it is mandatory they act with common sense, patience and responsibility.

If the terrorist organization lays down their weapons, then it will open the road for the BDP to be able to conduct independent and uncommitted politics, it will save the BDP from the domination of weapons. During this process, we are expecting the BDP to progress and not repeat the same mistakes from the past.

Accusations, insinuations and slander of the Turkish Republic state and government right after the assassinations in Paris are extremely irresponsible and tactless.

The state's institutions and officials have been trying for years to initiate this peace process. There may be irresponsible attempts at sabotage and provocation. No one should remain under the effects of heavy clouds of dark propaganda. Everyone needs to address their conscience. We will work together to ensure that what transpired in the past does not continue in the future. We will remove the weapons and closed fists between us and will embrace as brothers."

'Let's put an end to this game'

On Wednesday, the bodies of the three women killed in Paris were set to be flown to Diyarbakir, the largest city in Turkey's mainly Kurdish southeast, ahead of a funeral ceremony on Thursday.
Prime Minister Erdoğan called for calm ahead of the funerals and warned against efforts to provoke trouble. "I believe that our sensible brothers in Diyarbakır, Tunceli and Kahramanmaraş will not rise to the bait.

Let us all put an end to this game together. Because there are some who want to dynamite this peace process. This must not be allowed to happen."