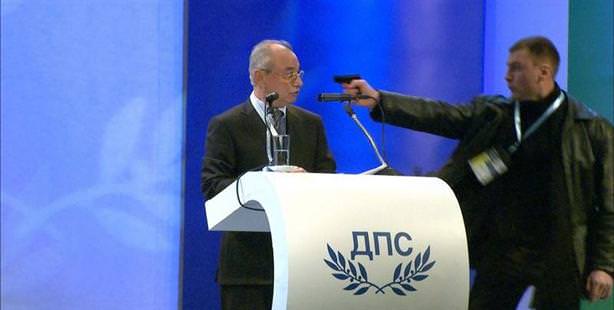 New details have begun to emerge in relation to the assassination attempt on Ahmet Doğan, the leader of the Movement for Rights and Freedoms (MRF) during the party’s 8th National Congress.

A man jumped on stage and pointed a gun at the leader of Bulgaria's ethnic Turkish party before security guards wrestled him to the ground during a televised conference on Saturday.

Ahmet Doğan, the long-time leader of the Movement for Rights and Freedoms escaped unscathed. Television footage showed the man jumping out of the audience and interrupting a speech by 58-year-old Doğan, who has led the party for almost a quarter of a century. Security guards were seen beating and kicking the attacker Oktay Enimehmedov.

According to reports in the Bulgarian press, Oktay Enimehmedov planned the attack on the Bulgarian politician of Turkish descent on his own. In his testimony, Enimehmedov was quoted as stating, "My intentions were not to kill Doğan. I wanted to prove that he wasn't untouchable."

Enimehmedov supposedly left a letter to his mother stating that he might be killed by Doğan's security detail. According to claims, the gun used in the attack, stated to be a gas pistol, could have harmed Doğan, but would not have been able to kill him. Enimehmedov may receive up to six years in prison for attempted murder or hooliganism.

'THE ASSAILANT WAS USED'

Speaking to SABAH, Turkey's Ambassador to Bulgaria İsmail Aramaz stated, "The assailant is a lumpen individual. We suspect that similar to in the Hrant Dink murder, he may have been used. What matters here is who gave out the orders."

The MRV's new party chairman Lutvi Mestan, who was elected at the convention, commented on the incident by stating, "It is crucial the political identity behind this attack is revealed. If the authorities are unable to do so, then they will have to bear responsibility themselves for the attack."