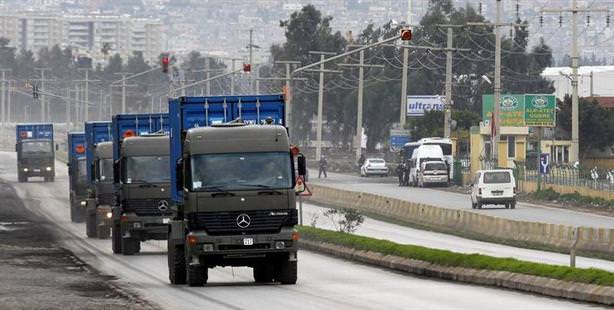 Vehicles transporting the Patriot missile systems sent from Germany arrived by ship to Turkey on Monday. The ships were unloaded at İskenderun Port and a 45-vehicle convoy has begun transporting the missile battery systems to Kahramanmaraş.

The Patriot missile defense systems Turkey requested from NATO and supplied by Germany and the Netherlands arrived to Turkey yesterday.

The Patriot air defense systems deployed from Germany arrived to Turkey yesterday aboard the 24,000 gross-ton, 196-meter-long, Denmark-flagged Suecia Seaways ship and were unloaded onto military vehicles at İskenderun Port. Once the unloading process was complete, the Patriot air defense systems, which will be stationed along the border with Syria, departed in a convoy consisting of 45 Germany military vehicles for Kahramanmaraş.

Speaking to the press, Commander of the German Patriot Systems Team Marcus Ellermann explained that the ships departed Germany approximately 13 days ago and arrived to the İskenderun Port on the date designated. "There are 300 vehicles, 100 containers and 400 soldiers on this ship. They will all be sent to Kahramanmaraş in order to be used in the event of a potential threat. We will not be intervening in any clashes in the region. The Patriot defense systems are capable of hitting a dangerous target in the air. The target will explode the moment it is struck and its pieces will fall to the ground. It will not cause great damage. As these systems are the latest technology and are able to directly strike the target, the harm caused will be minimal," stated Ellermann.

When asked by journalists about the cost of the system, Ellermann stated, "Since this is a NATO operation, the costs will be shared by the siding countries. Germany has allocated 25 million euros. However, when these sorts of costs occur as a result of an action on behalf of NATO, countries share the cost," said Ellermann.

Director of Communications for the Turkish Armed Forces Major noted that the Patriots were brought to Turkey in order to support Turkey's air defense capabilities. "The Patriot air defense systems will be a part of the NATO integrated air defense systems and will begin operating under a system in which Turkish officials will be a part of at every level of command and control," stated Alabacak. Major Alabacak also emphasized that the materials brought to Turkey by ship will be transported to Kahramanmaraş as soon as possible in order to ensure installation efforts are begun without losing any time.

Meanwhile, Eberhard Pohl, the German Federal Republic's Ambassador to Turkey was also on hand at İskenderun Port, arriving in order to conduct inspections prior to the unloading of the Patriot batteries.

The Gibraltar-flagged, 18 gross-ton ship called the Louise Russ arrived to the İskenderun Gulf on Sunday, carrying the Patriot systems deployed from the Netherlands. The boat anchored in the gulf awaiting the unloading of the German Patriot system batteries. The Dutch soldiers to be deployed to operate the Patriot systems also left Holland yesterday, arriving to Adana in the evening. A special ceremony was held for the approximately 250 military personnel who departed from Eindhoven Airport.

NOT A BIRD WAS ALLOWED TO FLY

Once the ships from Holland and Germany arrived to İskenderun Port, security measures in the region were noticeably amped up. Security forces were dispersed to all important junctions in the district and reinforcement personnel were brought in. A ship belonging to the Coast Guard Command staged continuous patrols of the port and its surroundings.