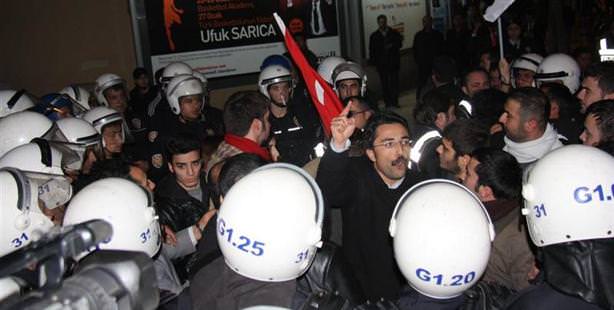 A group from the Turkish Youth Union (TGB) made an attempt to put sacks over the heads of a group of German soldiers that had arrived to İskenderun as part of a NATO mission to deploy Patriot missile defense systems along Turkey’s border with Syria.

A small group of German soldiers who had just arrived to Turkey in order to assist with the deployment of NATO Patriot systems were attacked last night by members of the Turkish Youth Union (TGB)an offshoot of the leftist Labor Party (İP).

The seven German soldiers were walking along Şehit Pamir Street when a group of approximately 30 activists, who had been following them for awhile, attempted to cover their heads with sacks.

Turkish police immediately intervened and brought the soldiers into a local jewelry store in order to secure their safety as they proceeded to attempt to disperse the TGB members who were chanting slogans against the deployment of Patriot batteries and later began to march. Nearly 100 police officers surrounded the group. When they continued to chant slogans and began insisting on making a press announcement, riot police were then brought in to disperse the group. Twenty-six members of the youth group were handcuffed and placed in police vehicles which transported them to the police department.

Meanwhile, a female reporter who was following the incident was mistaken for a member of the group and was taken into custody and placed in a police car. Once she successfully convinced security members otherwise, the reporter was later released.

This is a translation of an article originally written by Veysel Cıncık.