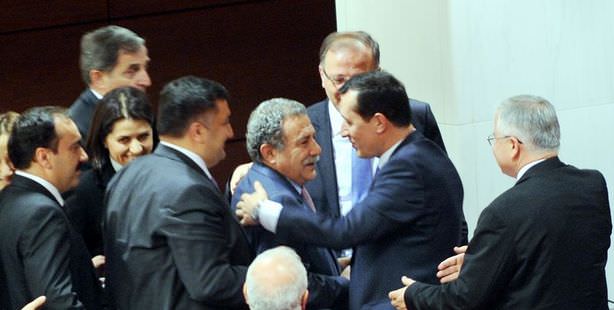 After sending out signs of an impending revision, Prime Minister Erdoğan announced a cabinet reshuffle on Thursday. The positions of ministers to culture and tourism, national education and health have all been appointed to newcomers in the cabinet.

After inferring that a cabinet revision could be in the cards "at any moment" on return from his three-country trip to Africa, Prime Minister Tayyip Erdoğan had sent signals of yesterday's announcement. Contrary to expectations however, the cabinet did not undergo a complete upheaval and instead just four new ministers will be brought in as "fresh blood". The alternation of the ministers of interior affairs, culture and tourism, national education and health is being widely considered as an effort to "breathe in new life to the cabinet and as a pacta sunt servanda for close staff and the ongoing peace talks in İmralı."

Erdoğan named Muammer Güler, a former Istanbul governor, as his new interior minister and Ömer Çelik, a vice chairman of the AK Party, as his new culture and tourism minister, according to a statement from his office. Mehmet Muezzinoglu, a medical doctor and former AK Party leader for Istanbul, was named health minister while Nabi Avci, a former adviser to Erdoğan and an architect of controversial school reforms last year, was made education minister.

FROM THE ISTANBUL GOVERNORSHIP TO MINISTER OF THE INTERIOR

It was long anticipated that former Minister of Interior Affairs İdris Naim Şahin would be replaced as he has regularly been the target of harsh criticism due to a series of interesting outbursts and appeared to be waning as the time past. Şahin has been replaced by former Istanbul Governor and present Mardin Deputy Muammer Güler. Born in Mardin in 1949, Güler graduated from the Ankara University Law School in 1972. Güler's first entry into politics was in 1973 as an officer in attendance (the candidate for district governor) in Balıkesir. He then went on to serve as governor of Niğde, Kayseri, Gaziantep and Samsun and then later as Istanbul Governor during the years 2003-2010. After his governorship, Güler became the MOI Undersecretary for Security and Public Order. He is married to Neval Güler and has two children.
Güler's appointment as Minister of the Interior is widely perceived as being an important message in regards to the management of the ongoing peace talks with the imprisoned PKK leader in İmralı. Upon hearing the news, Güler stated, "This is an extremely honorable duty for me, my family and especially for the province of Mardin for which I represent."

AK Party Deputy Chairman in charge of Foreign Relations and Adana Deputy Ömer Çelik will be replacing Ertuğrul Günay as Minister of Culture and Tourism. Born in Adana in 1968, Ömer Çelik is one of the youngest members of the AK Party. He is also known for being one of Erdoğan's closest advisors. Although they have worked together closely since the mid-90s, Çelik has been serving as Erdoğan's advisor since 2002. He was the only member of Erdoğan's advisors who had not yet been included in the cabinet. This is his third term as the AK Party's Adana deputy. Çelik received his degree from the Gazi University School of Economics and Administrative Sciences' Department of Public Administration. Ömer Çelik is fluent in English and has a love for cigars and motorcycles and is regularly referred to as the AK Party's confirmed bachelor.

ERDOĞAN REFERS TO HIM AS "NABİ HODJA"

Chairman of the Parliamentary National Education Commission and Eskişehir Deputy Nabi Avcı will be replacing Ömer Dinçer as Minister of National Education. Nabi Avcı was born in Bilecik in 1953. He has served as Erdoğan's chief advisor and press advisor. Avcı accompanies the prime minister, who refers to him as "Nabi Hodja", on most of his meetings. He is considered to be a balanced politician who is ideologically liberal yet conservative in his own lifestyle. He is well-versed in literature and the arts. He has known Erdoğan since the 1990's and was part of his campaign team for the 1994 elections. Avci graduated from the Middle East Technical University and served as advisors to both Turgut Özal and Yıldırım Akbulut.

MÜEZZİNOĞLU HAD NO NATIONALITY FOR THREE YEARS

After a record-breaking 11 years serving as Minister of Health, Recep Akdağ hands over his position to Edirne Deputy Mehmet Müezzinoğlu. Müezzinoğlu, who was classmates with Prime Minister Erdoğan from İmam Hatip School, served as the AK Party's Istanbul Provincial Chairman from 2002 to 2007. Explaining how he heard the news of his appointment in Edirne, Müezzinoğlu stated, "I was touring a neighborhood with other party members when the local women told me that I had been appointed minister."

Mehmet Müezzinoğlu was born on January 9th, 1955 in Komotini, Greece. This is his second term as a deputy for Istanbul. He speaks Greek, English and Arabic and is married and the father of two children. In 1982, he graduated from the Istanbul Cerrahpaşa Medical School, after which he returned to Greece. Due to certain policies against Western Thracian Turks, he defected to Turkey in 1983 and renounced his Greek citizenship. By 1986, when he took on Turkish citizenship, Müezzinoğlu had spent three years without an official nationality.