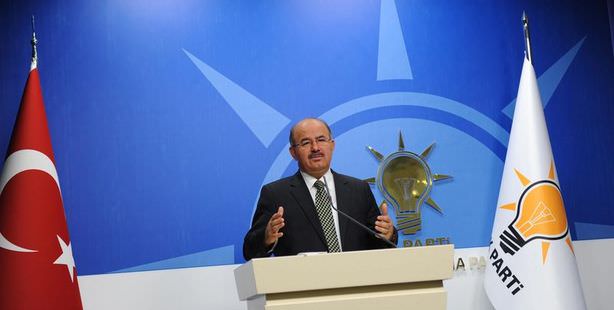 Reactions continue to come in regarding a statement inferring that “Turks and Kurds are not equal” made by CHP’s Izmir Deputy Prof. Dr. Birgül Ayman Güler during a General Assembly session last week. The latest public response to the main opposition lawmaker Güler has come from AK Party Deputy Chair and Spokesman Hüseyin Çelik.

In a recent outburst in reaction to the statement that "the Kurdish nationality is not equal to the Turkish nation" uttered by Birgül Ayman Güler, Republican People's Party (CHP) member and former spokesman, Hüseyin Çelik a Parliamentarian for the Justice and Development Party (AKP) said, "Racism in the CHP's genes."

Commenting on the incident, which led to reactions in the assembly at the time as well as a series of backlashes since then, Hüseyin Çelik stated the following:

"To tolerate, accept or gloss over this statement as if it was made in passing is impossible. No matter what the intention or purpose was, it is a true calamity that this statement was perceived as such by the public. No offense but the CHP has racism in their genes. During the single-party era, Minister of Justice Mahmut Esat Bozkurt, who was also a highly significant figure in the CHP, made a statement in which he said, 'Gentlemen, no one should drag this nation to the right or to the left, the lords of this nation are the Turks. Those who are of Turkish heritage have just but one right and that is to serve and be a slave.' This is not something that can be glossed over," states Çelik, emphasizing that this remark was made at a time when Mahmut Esat Bozkurt was actively serving as justice minister. "That's fine. These words were said at that time, however, can the CHP honestly say that they no longer stake claim to these words? The answer is 'No.'

Just last year, Mr. Kılıçdaroğlu opened a park in his name and a statue in his honor in Kuşadası and he did so with honor and pride. How could the person who uttered these words be so revered? CHP's policies are racist policies. The massacre that transpired in Dersim is an indicator of this. There is no Kurdish and there are no Kurds that is the CHP's ideology and now everyone knows…"

"The Prime Minister is not saying, let's turn a blind eye to coup perpetrators, he is not saying let's stop trying them. What the prime minister is talking about is being judged fairly. Delayed justice is not justice. It is everyone's right to have a fair trial. When you try the PKK, do it fairly, the same goes for when you try the KCK. When you try Ergenekon or the Sledgehammer case, do it fairly, normal citizens must also receive a just and swift trial. Delayed justice is not justice. This is something we have always said. What the prime minister is saying is this: When these cases are neglected in Turkey, then what surfaces amongst the public is the fact that the detainment period in itself turns into the actual sentence. As the Prime Minister of this nation and someone who does not withhold technological support or human resources from the judiciary, he wants this process to be completely swiftly and to therefore be lifted from this nation's agenda. However, this in no way means that he is indulging those responsible for staging coups. This is what I have gathered and comprehended from the Prime Minister's remarks," stated Çelik.