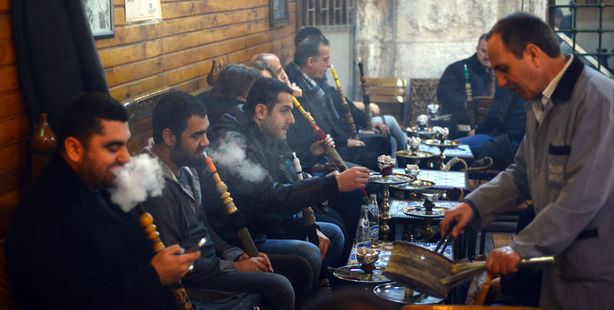 Nargiles, or water pipes, which have seen a recent surge in popularity of late, will no longer be allowed in indoor public establishments in Turkey. In an effort to curb smoking in public venues, Turkey will now be implementing a ban on smoking water pipes indoors, a move which follows the prohibition of cigarettes in cafes and other indoor entertainment venues which went into effect in 2009.

According to a new Tobacco and Alcohol Market Regulation Council regulation published in the Official Gazette on Monday, venues that serve nargiles will have to apply for a new license within the next six months, which will classify the use of nargiles in the same category as tobacco.

In order to sell the use of nargiles, establishments will now have to acquire a document permitting the sale of water pipes as a tobacco product. This new regulation will curtail establishments allowing the consumption of nargiles indoors on the basis that what is smoked is not tobacco but instead an herb-based product. All establishments that obtain the necessary sales document for nargiles will also be subjected to the cigarette-smoking prohibition. Without this document, cafes, coffeeshops and other similar establishments will be prohibited from serving nargiles whatsoever.

Meanwhile, the regulation also includes the stipulation that those who want to sell tobacco to establishments that serve water pipes will have to obtain wholesale authorization.

According to the Ministry of Health, the prohibition of cigarette smoking indoors led to the opening of a number of 'nargile' establishments, which due to the lack of appropriate legal measures on the tobacco and other aromatic herbal mixtures used for water pipes, they have been unable to regulate. According to authorities, this new regulation, which requires nargile-serving establishments to acquire a special license, will ensure that within the next six months the sector will become regulated.