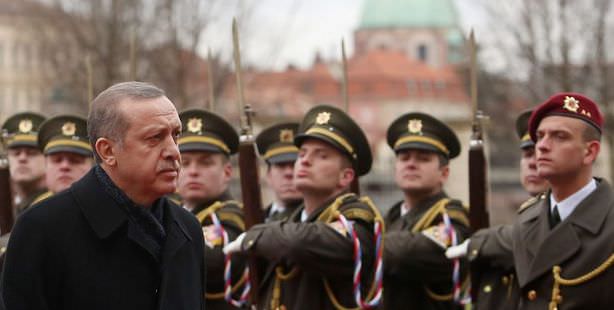 Noting that Turkey’s Armed Forces will hold back if the PKK lays down their weapons, Prime Minister Erdoğan stated, “According to the information conveyed to us by our intelligence organization, we are aware that the messages delivered by İmralı are extremely important. Erdoğan was referring to the ongoing peace talks with the PKK leader Abdullah Öcalan, who is serving a life sentence on İmralı Island.

Prime Minister Recep Tayyip Erdoğan commented on the ongoing peace initiative with the PKK in an effort to ensure the terrorist organization lay down their arms for good during a press conference held at the Istanbul Atatürk Airport prior to his departure on a three-country tour of Eastern Europe, during which he will be visiting the Czech Republic, Hungary and Slovakia.

(On the peace talks with Öcalan at İmralı) "It could be wrong to confuse the ultimate objectives with the situation reached at present. I have announced these objectives from the start and I will do so again. There is no way that we will halt the fight against this separatist terrorism until they relinquish their weapons. We have also said that we may negotiate with their political representatives. According to the information conveyed to us by our intelligence organization, we are aware that the messages delivered by İmralı (Öcalan) are extremely important. If the PKK lays down their weapons, we will ensure them a safe passage out of this country. Our security forces are not exactly fond of staging operations."

(Commenting on BDP executives saying they have not been given a specific date to pay a second visit to the island.) "There is no way that a specific date or even promise can be made to their political extensions as for when they can meet with the PKK leader on the island again. In order for this solution process to function healthily we have granted all authority on the issue to our Ministry of Justice. The first session of talks have been held. As for who will be granted permission and when, that is up to our Ministry of Justice. We will determine the timeframe once our Minister of Justice presents his proposal to me personally. In the fight against terrorism, there is nowhere in the world that could provide a specific date. In addition, we are not sitting down with anybody at the negotiations table. Let me just say this, because we could never sit down to the negotiations table with an illegal organization."

(On the request for reinforced local administrations instead of democratic autonomy.)

"As a prime minister who has served in local administrations, I don't find the term 'reinforced local administrations' to be correct. At present, Turkey's local administrations have never been as strong as they are now from a financial standpoint. There are those who harbor intentions of channeling this into different areas. Trillions of liras go to one city and if where these funds have gone is not evident, then they will be audited. It is this auditing which makes them uncomfortable. When it comes to democratic autonomy, there isn't a Kurdish issue in Turkey, there is a terrorism issue."

(On Israel-Syria) "Anything could happen in the region at any moment. Especially those who have misconceived the Israel issue and continue to nourish Israel as if it was a spoiled child can expect anything at any moment. Then again, this is not Israel's first intervention in Syria. The Golan Heights issue still abounds. The Israeli state, which murdered our people in international waters, has a terrorizing mentality. As for what they may do and where, is something that remains unclear even now."

(On the Shanghai Cooperation Organization) "The Shanghai Five is not an alternative organization to the EU. We are currently exchanging dialogue with members of the Shanghai Five. If a nation has been made to wait at the door of the EU for 50 years, then wouldn't it be time that nation make a decision? We will be making a trip to Brussels soon during which we will speak to them openly. If you are going to go ahead and do this, then do this. If you want us to break apart, then we can also discuss this separately. As for this issue, of course we will be seeking out alternatives."

This is a translation of an article originally written by Mesut Er and Cevdet Özdemir.