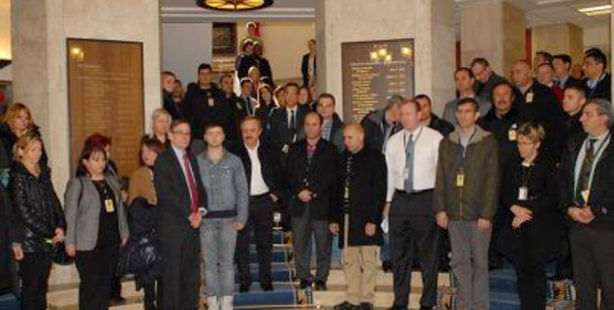 Turkey’s National Intelligence Organization (MİT) and the CIA have joined forces to investigate the background connections to the suicide bomber who staged an attack on the U.S. Embassy on Friday.

As the investigation into the suicide bombing at the U.S. Embassy in Ankara deepens, Turkey's MİT and the United States' CIA have now joined forces. The Turkish National Organization (MİT) is conducting a domestic-based investigation while the CIA is operating abroad. Meanwhile, the Turkish Police Department is also conducting an investigation ordered by state prosecutors. Intelligence organizations are seeking to track down how and from whom Ecevit Şanlı, who was said to have acted on the DHKP-C's orders, received the bomb used in the explosion. Police are also inspecting the TNT, hand grenades and weapons used in the attack.

While the U.S. are acting on the fear the threat still continues, the investigation is focusing on all of the organization's ties and structuring. Both intelligence agencies are looking for details into Şanlı's personal life in Germany and his connection to the Revolutionary People's Liberation Party-Front (DHKP-C), a far-left group which is virulently anti-U.S. and anti-NATO and is listed as a terrorist organization by Washington.

The United States Embassy Legal Counselor met with Deputy Chief Public Prosecutor Nuri Yiğit, Şadan Sakınan and prosecutor Mustafa Bilgili who inspected the blast site. During the meeting, a briefing was held on the latest developments and Şanlı's confirmed ties and the question of who the attack targeted were supposedly laid to the table.

Officials from the prosecution state that the incident will become further clarified in the days to come. Police have also questioned Şanlı's siblings and relatives who came to pick up his body from the Ankara Forensics Medicine Institution. It turns out a majority of Şanlı's relatives happen to also be living abroad.

A MOMENT OF RESPECT FOR AKARSU

The U.S. Embassy in Ankara, which has brought its flags down to half mast in commemoration of the attack which took place on Friday at 13:13, held a minute of silence yesterday in honor of security guard Mustafa Akarsu who lost his life in the attack. The moment of silence took place at 13:13 yesterday, exactly 72 hours after the atrocious bombing took place. The deep silence at the embassy continued as a commemoration ceremony for Akarsu followed. U.S. Ambassador Francis Ricciardone and a number of embassy employees were in attendance. Flags will remain at half-mast at both the U.S. Embassy and the Turkish U.S. Consulate until tomorrow. Akarsu's son Sami Akarsu and his cousin Murat Akarsu were also present for the ceremony.

Turkish journalist Didem Tuncay was also seriously wounded in the blast. Ankara Numune Hospital Director Prof. Dr. Nurullah Zengin has announced that shrapnel entered Didem Tuncay's right eye from the front and exited from behind, which has caused permanent vision damage. Zengin says that she will be undergoing another surgery on Friday night in which doctors will try to retain the integrity of her eye socket."