President Gül says Turkey was on alert for a potential attack 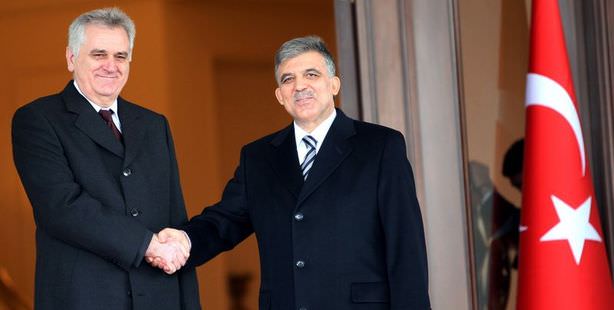 Remarking on the attack at the U.S. Embassy in Ankara, President Gül stated, “Our police department and intelligence organizations were on full alert and were issuing warnings to everyone. However, unfortunately they went ahead and staged this attack and it was not able to be prevented.”

President Abdullah Gül spoke about Friday's suicide bombing of the U.S. Embassy by the DHKP/C, by stating, "Unfortunately our police department and intelligence organizations were on full alert and were issuing warnings to everyone of a potential attack by this terrorist organization. However, unfortunately they went ahead and staged this attack and it was not able to be prevented."

President Gül was speaking during a joint press conference with Serbia President Tomislav Nikolic at the Çankaya Palace.

Gül noted that as soon as news of the bombing surfaced, he relayed messages of condolences to U.S. officials and stated, "Of course, our greatest grief is for the death of a Turkish security guard. We are also closely following the medical condition of our valued journalist and comrade Didem. I guess we will call it a turn of fate. Coincidentally, she happened to be there at that time and unfortunately she ended up getting hurt. We are closely following her situation and her condition seems to be improving quite well," said Gül.

Gül also mentioned the ongoing peace initiative with the PKK terrorist organization by underlining the fact that everyone is exerting intense efforts at present to ensure that terrorism becomes a thing of the past in Turkey. "I see that when it comes to this issue, the expectations are much more progressive than what is actually happening. This shows that the public and everyone has good intentions. I hope that the terrorist organization will receive this message and will do what needs to be done as soon as possible," said Gül.

SHANGHAI FIVE IS NOT AN EU ALTERNATIVE

Gül also commented on the recent speculation that Turkey may join the Shanghai Five as an alternative to the EU. "Unfortunately, the negotiation process has not gone the way we hoped due to the biased actions of certain member nations. First and foremost this is what our Prime Minister is reproaching. The Shanghai Cooperation Organization and the EU are not alternatives to one another. Turkey wants to successfully complete this negotiations process. When we concluded the process of negotiations any EU member nation can go to a referendum and some will. They can then ask their public. Turkey is at present a country that has its house in order and is working to better apply EU criteria. We have had some deficiencies and we are trying to rectify them with new legislations. I am of the opinion that this is how you need to see this."