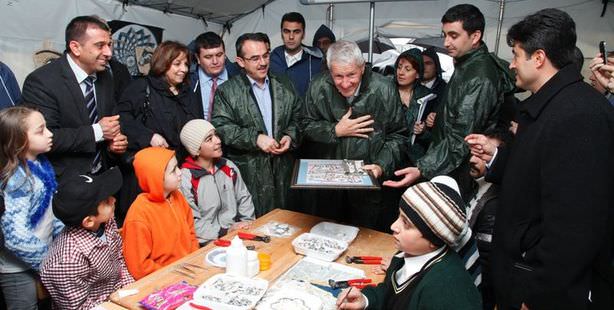 Council of Europe Secretary-General Jagland was accompanied by Justice Minister Ergin in paying a visit to the tent city erected in Hatay to host refugees from Syria. Commenting on the accommodations set up to host their neighbors in turmoil, Jagland said, “Turkey’s actions are an example to other nations.”

While visiting the refugees being housed at a tent city in Hatay, Council of Europe Secretary-General Thorbjorn Jagland expressed how impressed he was with what he saw. "When it comes to offering aid, Turkey provides a very important example to other nations," said Jagland.

European Council Secretary-General Jagland was joined by Minister of Justice Sadullah Ergin in a tour of the Boynuyoğun tent city located in Hatay's Altınözü district.

Jagland told reporters that he expects the crisis in Syria to come to an end as soon as possible and thanked Turkey for doing such a great job. "I was very touched by the situation here. We see both how people are living under difficult conditions and how Turkey is offering support during such a serious crisis. When it comes to offering aid, Turkey offers a very important example to other nations," said Jagland.