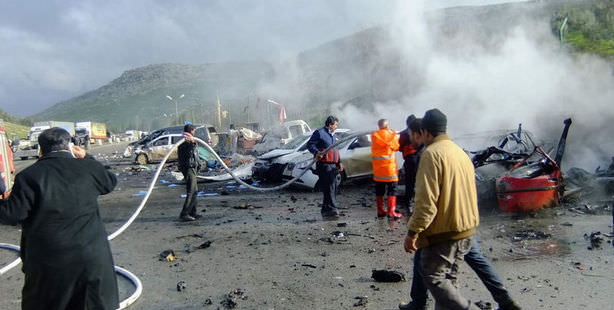 A Syria minibus loaded with explosives was detonated on Monday at a crossing point along the Turkish-Syrian border which has been regularly used by Syrian refugees crossing into Turkey to seek shelter. Turkey’s Ministers of Justice, Internal Affairs and Customs and Trade departed for the area last night upon hearing news of the blast, which killed at least 13 people and wounded dozens.

Ministers Güler, Ergin and Yazıcı departed for Hatay from Ankara's Esenboğa Airport after their cabinet meeting last night. Responding to questions by reporters Interior Minister Güler stated, "Our Deputy Prime Minister and Government Spokesman Bülent Arınç just announced after the Council of Ministers meeting that the death toll was at 12, however as I was heading to the airport, I heard that the number of deaths had risen to 13. I am joined by the Minister of Justice and the Customs and Trade Minister as we head to Hatay. There are 27 wounded, nine of which are Turks and 18 are Syrian nationals. We have also confirmed that three of those killed were Turkish citizens," stated Güler.

"I also want to point out that 22 minutes prior to the attack, a grey vehicle had parked where the blast took place, then just two minutes before the explosion a red car also parked in the same spot. We know for sure from camera footage that these vehicles came from Syria," stated Minister of Interior Güler, who also noted that 19-20 vehicles parked in the vicinity were damaged in the blast.

In response to a question on the speculation there were two explosions, Güler said, "We know that one of the parked vehicles exploded. However, there was an explosion just two minutes later and that may have been from the gas tank in the vehicle right beside it."

Güler was also asked if the owners of the parked vehicles had been informed of the blast, to which the Interior Minister responded by stating, "Our colleagues are working on the case piece by piece. They say this was a powerful explosion. There are four crossing points at this border gate, two of which are closed. The explosion took place at a site located near the closed gate and the customs lodging. It is a saddening event and the wounded are still being treated. All necessary precautions are being taken," stated Güler, who went on to point out that three of the 13 people killed were Turks and security forces are now working on trying to identify the ten Syrian nationals who were killed in the blast.

THE VEHICLE CAME IN FROM SYRIA…

Minister of Customs and Trade Hayati Yazıcı has also confirmed that the vehicle that exploded came from Syria. Responding to a journalist's question, Yazıcı said, "According to the initial information coming in, the vehicle is stated to have crossed into the border from Syria."