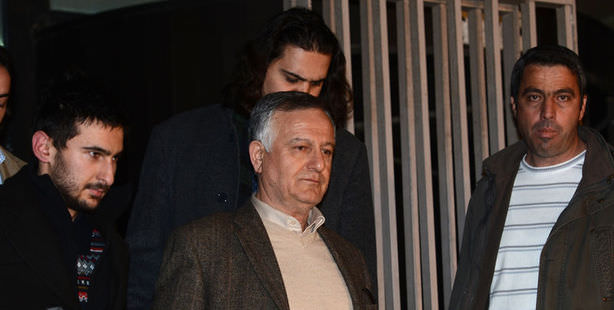 Five retired generals were brought in to testify for having attended sessions of the West Study Group (BÇG) led by Çevik Bir in connection to the ongoing probe into the February 28th, 1997 postmodern coup. The court released one general and arrested the remaining four.

The seventh wave of an investigation by the Ankara's Chief Public Prosecutors Office into the February 28th, 1997 postmodern coup sought out commanders who attended West Study Group (BÇG) meetings with retired General Çevik Bir, who is also currently under arrest in the Feb. 28th probe. Five retired generals were detained yesterday morning in Ankara and Istanbul for questioning. After testifying to prosecutors overseeing the Feb.28th coup probe, the court ruled to arrest four out of the five retired generals called to testify.

As the release of the indictment for the February 28th probe awaits, Prosecutor Mustafa Bilgili, who is overseeing the investigation, requested the records kept from meetings of the clandestine West Study Group chaired by Çevik Bir from the General Staff.

The documents were sent in by the General Staff and a commission from Turkey's Grand National Assembly. As a result of an evaluation of these records as well as documents from the ongoing Ergenekon and Balyoz investigations and records obtained in a raid on the Higher Education Board, warrants were released for the arrest of the five generals for their alleged roles in the coup.

Prosecutor Biligili focused his questioning on the West Study Group (BÇG), a clandestine group formed within the military which both categorized people in accordance to their ideological backgrounds and contributed to the staging of the planned coup. Bilgili is said to have asked, "What was the reason behind decisions made during BÇG meetings such as announcing Marshall Law, releasing memorandums, overthrowing the government, devising an action plan against the new government and establishing a crisis table?"

The retired generals consecutively responded that although they remember attending the meetings, they do not remember the content.

During the testimony, prosecutors allegedly asked questions regarding the content discussed in meetings held abroad, to which the generals also refrained from commenting on.

After providing their testimonies, the five generals were then transferred to the court where Orhan Yöney, Köksal Karabay, Hayri Bülent Alpkaya and Altaç Atılan were arrested and Ersin Yılmaz was released on probation.

THE MAIN ACTOR IN THE SACK CRISIS

When 11 Turkish soldiers were subjected to U.S. forces placing sacks over their heads in Northern Iraq, they were army personnel from the Special Forces Command. At that time, the Special Forces Command was overseen by the General Staff Operations Department run by Lieutenant General Köksal Karabay. It was deemed certain that he would eventually be made Chief of General Staff and was one of the first in line to be promoted to full general by the Supreme Military Council. However, he was never promoted and ended up resigning in August, 2004 as the Third Army Corps Commander. Karabay is also the Turkey director for the international security firm Black Hawk.

This is a translation of an article originally written by Alper Sancar and Aliye Çetinkaya.