Turkey’s new constitution to be people-focused 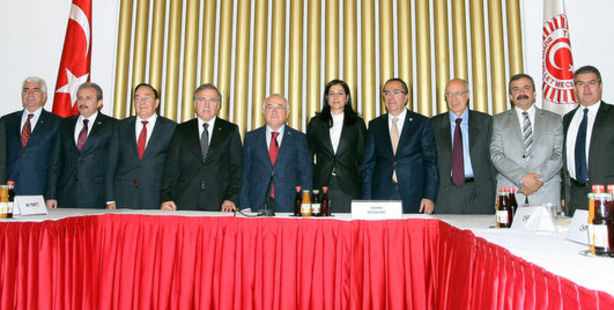 The Parliament Constitution Conciliation Commission has reached a general consensus on 31 articles. The Constitution will begin with the emphasis, “A person’s honor and pride is inviolable and constitutes the basis for human rights and the constitutional order.”

The Parliament Constitution Conciliation Commission has been working with sub-commissions since May of 2012 to draft Turkey's new constitution. When these sub-commissions have completed their preparatory work on amendments they are then handled by the higher commission.

Parties have already presented their proposals for the sections on fundamental rights and freedoms, legislation, executive, judicial and administration. In the weeks to come, parties will be presenting their proposals for the final section, which will reveal what each party is seeking from the new constitution. In a sense, each party will have drafted "their own constitution."

The commission has deliberated on a total of 91 articles. A general consensus has been reached on 31 of these articles. However, for the remaining 60 articles, compromise has only been met for certain items.

The Conciliation Commission has completed their deliberations of the section on Fundamental Rights and Freedoms. The legislative and executive sections have been held up due to the ongoing debate of switching to a presidential system. Deliberations on the administrative section are still ongoing. The following is a summarization of the 31 articles and their content which the Conciliation Commission and its sub-commissions have reached a consensus on:

PRIDE AND HONOR: When party representatives first sat down to the table to discuss the drafting of a new constitution, the aim was not to make the state a priority but instead to focus on the individual. In an effort to ensure this, the commission decided to make the first article deal with individual pride and honor.
This article, which is being included in the constitution for the first time, will state, "A person's honor and pride is inviolable and constitutes the basis for human rights and the constitutional order."

BASIC RIGHTS AND LIBERTIES: Every person, when it comes to issues of individuality, will be inviolable and will have irrevocable human rights and liberties.

RIGHT TO SURVIVAL: Security forces will not be allowed to exert force that may infringe on someone's right to survival or constitutes a threat to that right.

THE PROTECTION OF MATERIAL AND MORAL ASSETS: No one's physical integrity may be interfered with, including for scientific experiments and selling organs in exchange for money will be prohibited.

TORTURE AND MALTREATMENT: Torture, inhumane or degrading treatment will not be permitted. No one may be subjected to maltreatment or penalization which is contrary to human pride and honor at any time, including when detained or serving time.

FORCED LABOR: No one will be subjected to compulsory work, forced labor or human trafficking.

INDIVIDUAL SECURITY: Constitutional limitations will be applied to detainment periods, such as those highly debated in the Ergenekon, Balyoz and KCK cases. The decision to detain a suspect with strong evidence against them will be dependent on whether they pose a threat of escape or of destroying or altering evidence. Without the existence of concrete evidence and without announcing the insufficiency of judicial control measures, the decision to extend detentions will not be made. Detainment periods will never be transformed into a form of punishment.

CONFIDENTIALITY OF PERSONAL LIFE: The confidentiality of an individual's private and familial life will not be penetrable.

PROTECTION OF PERSONAL INFORMATION: Personal information and data may only be collected, processed and used in a manner that will not lead to discrimination only in accordance to the individual's open consent or based on a legal justification by law.

PRIVACY OF PROPERTY: No one's home will be subject to entry or searches without a ruling from a judicial authority.

FREEDOM OF COMMUNICATION: Communication will have privacy and will be untouchable.

SETTLEMENT AND TRAVEL LIBERTIES: The liberty of settlement will only be limited by justifications pertaining to the protection of the environment and cultural assets or the realization of healthy and organized urbanization.

FREEDOM OF SCIENCE AND THE ARTS: Everyone will be able to freely study, teach or practice in science and the arts.

PROPERTY AND INHERITANCE RIGHTS: Everyone will have the right to own property and acquire inheritance.

FREEDOM OF LABOR: Everyone will have the right to work in the line of their choice and sign contracts.

FREEDOM TO SET UP ASSOCIATIONS: People will have the freedom to set up associations, to be members of associations and to cancel that membership.

MEETINGS AND DEMONSTRATION MARCHES: Everyone will be allowed to organize or participate in demonstrations that are unarmed and do not turn violent.

THE RIGHT TO FAIR TRIAL: Everyone will have the right to a "fair and appropriate-length trial." Findings that have not been acquired according to the law will not be admissible as evidence.

CRIME AND PUNISHMENT: The death penalty and general confiscation punishment will not be served.

FREEDOM OF THOUGHT AND EXPRESSION: Everyone will be allowed to express their thoughts and opinions verbally, in writing, painting or other means either independently or in groups. This right may be subjected to limitations based on protecting others rights, promoting or praising violence or in order to prevent the development of feelings of enmity or hatred.

FREEDOM OF PRESS: The state will ensure that the freedom of press and acquiring information will allow the status quo and a majority in the media to freely develop. Halting publishing for a designated or undetermined amount of time will no longer be allowed with the exception of publications that openly violate individuals' personal lives or are shown as criminal evidence.

THE FREEDOM TO CORRECTION OR RESPONSE: Anyone whose honor or pride has been harmed or whether they have been inaccurately or misrepresented in a publishing will have the right to correct the facts and respond.

ENTERING PUBLIC SERVICE: There will be no discrimination other than fulfilling the qualities required for public service positions. In addition, the principle of gender equality will be observed in said positions.

ACQUIRING INFORMATION: Everyone will be able to apply to the Grand National Assembly or other official authorities in order to express their demands and complaints regarding themselves personally or the public.

THE FOREIGNER SITUATION: Individuals who have the high probability of being subjected to the death penalty or other degrading treatment in the country they came from will not be extradited.

LIMITATION OF LIBERTIES: An important amendment was made to this article, by way of including the phrase, "The basis will be liberties and limitations will be the exception."If there is a discrepancy on any issue, then the situation will always be evaluated in favor of liberties.

RIGHT TO MEDICAL CARE: No one will be denied basic medical services. Every woman will have the right to obtain free medical services pertaining to childbirth and their reproductive health.

SOCIAL SECURITY: No one will be employed without being included in the social security system.

RIGHT TO THE ENVIRONMENT: The state will be responsible for preventing environmental pollution and increasing the quality of the environment as well as ensuring the naturalness of food.

RESIDENCE AND SHELTER: Citizens will have the right to reside or take shelter in a manner appropriate to human pride in which their basic needs are provided for.

FAIR WAGES: Minimum wage will not be subject to taxation. The minimum wage will also be fair enough to ensure the individual is able to sustain their life in honor and pride.