The public in Diyarbakir want terrorism to come to an end 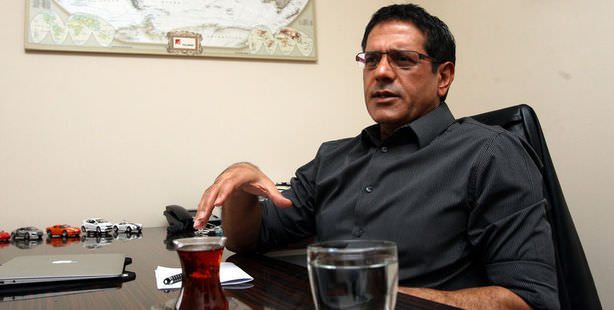 SABAH had the opportunity to speak with İbrahim Dalmış, owner of Pollmark Research Company, on the ongoing peace process. According to Dalmış there is strong support on the streets of Diyarbakır. The highest support is coming in from the educated younger Kurdish population, says Dalmış who also adds that if the BDP were to break away from the PKK they would be the strongest players in the initiative.

İbrahim Dalmış, owner of the Pollmark Research Company, which is readily referred to by the public as "the prime minister's researchers," evaluated the ongoing peace process for SABAH.

Dalmış says that there has never been this amount of support gathered on any issue before as it has for this ongoing peace process. "You cannot direct a process based on the perception of society. However when concrete results are achieved, there will be a monumental amount of support and no other political movement will ever be able to receive this level of support," states Dalmış, who went on to relay the following analysis based on his research:

GREAT SUPPORT FROM THE KURDS: "Turkey's Kurdish-rooted citizens, who have suffered the most from the existence of the PKK terrorist organization and the ongoing terrorism, are offering the greatest support for the ongoing process. How much can the PKK disrupt the life of a man living in Izmir? At most, they may experience some sort of situation while serving their military duty. However, for those living in Diyarbakır, this is a situation they deal with regularly in their daily lives. In terms of development, this region is the farthest behind. The economy is not sufficiently in the forefront. The sole issue is one of identity. The people living there are beyond sick of the situation. Kurds would be the ones to offer the highest support to even the smallest glint of hope. The BDP base is also included. Support on the streets of Diyarbakır is great. Those who are most interested in and supportive of the process are mainly educated males of the young to medium age level and the Kurds. Even if the remaining public had a negative perspective of the initiative, it wouldn't be very influential."

PREPARATIONS FOR PROVOCATION: "Citizens have in essence bought on to the potential of provocation during this process. In the case of negative developments, they are responded to under the assumption it was an attempt to obstruct the ongoing talks. In other words, society has now been inoculated. When three female PKK members were found murdered in France, it was widely accepted that it was a provocation in response to the ongoing process or an outright attempt to derail it. It was also wrong to bring their bodies back to Diyarbakır. If they had tried to stage a show of force or shouted slogans blaming the Turkish government then it would not have been perceived to be just propaganda, it would have been considered as a direct stance against the process, which would have brought it to an end."

THERE IS NO TURKISH-KURDISH DIVIDE: "There is no dissolution as perceived between the Turkish segment and the Kurdish segment. If there had been such a divide then BDP's votes today would have easily reached the 15 percent mark. The Kurdish population does not diverge from the Turkish segment as is evident from the support exhibited for the ongoing peace process."

IF IT WEREN'T FOR THE PRIME MINISTER…: "The most critical factor during this process is the fact that Prime Minister Tayyip Erdoğan is behind it. He is someone that can mobilize the masses. When he speaks positively about a subject even those who have no idea about the issue begin to develop an affirmative stance. Sixty percent of the public may support Erdoğan and like him, however when he speaks, his words influence at the very least 40 percent of the population. This positivity is a result of the fact that Mr. Tayyip is behind the ongoing process. It would be difficult to garner this much support in any other situation or with any other person. This issue is being solved with Mr. Tayyip. From here on out there will be no other political leader that will be able to show much more courage on the matter. If Tayyip Erdoğan were to back away, it would result in great disappointment on all sides."

"THE PERSON SELECTED FOR PEACE TALKS WILL BECOME MORE POWERFUL"

"If the BDP were to relay to the public in the proper language just how they are players in this process, then they could influence the perspective on the process. However much the BDP take over from the PKK during this process will make them that much stronger. They will also have strengthened their position in light of every actor in the region.

There is also a troubling situation when it comes to the BDP members that will be sent to İmralı Island to speak with Öcalan. The government is also dealing with this issue. The individuals selected to hold peace talks with Öcalan, will become more significant within the Kurdish movement. However, from the BDP's perspective, this should not turn into a bargaining chip. The objective is to specially select the individual who will be involved to this degree in the process. It is the government's most natural right to want to strengthen the individual they believe they will be able to succeed with."