Turkey’s police to solve attack in their own style 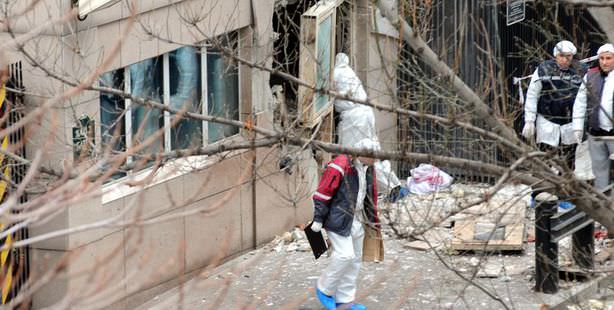 In the aftermath of the attack on the U.S. Embassy in Ankara, U.S. Security forces proposed Turkey release a “wanted list” for those involved and even suggested a reward be offered for tracking down the suspects. Turkish security forces responded by stating that this method goes against Turkish law, and could inspire perpetrators to run and went ahead and staged their own operation against the DHKP-C, the far-left Revolutionary People's Liberation Front, to which suicide bomber Ecevit Şanlı was a member.

The United States and Turkey have been collaborating and sharing intelligence in the aftermath of the February 1st bombing of the U.S. Embassy in Ankara. Also in cohorts in the investigation, the U.S.' Federal Bureau of Investigation (FBI) suggested Turkish police establish a 'wanted list' to track down the suicide bomber's co-assailants and even proposed offering a reward system for any tips that come in. Ankara however had to draw the line and remained steadfast to Turkish security forces' ongoing efforts and vowed to continue the investigation in a "Turkish-style of operation."

U.S. Ambassador Francis Ricciardone expressed his expectations the two nations would be working in collaboration on the case during an extended meeting with Turkey's Foreign Affairs Ministry Undersecretary Feridun Sinirlioğlu. Ricciardone then went on to express similar sentiments to Turkey's Ministries of Justice and Interior Affairs. The U.S. Ambassador also requested that any evidence collected by the Turkish Police Department and National Intelligence Organization be shared with the U.S. as a strategic partner in the investigation.

While Ambassador Ricciardone was attempting to establish the groundwork for effective cooperation and information-sharing between the FBI and Turkish police, the embassy has shared all of the latest data compiled regarding both the interior and exterior of the building in the capital and specialists from the FBI have worked in close collaboration with Turkish police.

US Ambassador Ricciardone reiterated his request for close collaboration on the case during a meeting with press correspondents in Ankara. During the meeting, Ambassador Ricciardone stated that they need evidence that will hold up in court in order to be able to file a case in the U.S. against the DHKP-C and told reporters the following: "FBI teams arrived to Turkey and were on the ground within 48 hours of the blast. The FBI has advanced investigative techniques as do the specialists in the Turkish police force. We are hoping to work together in order to further advance in the investigation. There are U.S. institutions that have the authority to persecute conspirators beyond American borders. With this attack, the DHKP-C has put themselves up against the U.S. Justice Department; they have committed this crime against the American system. We are hoping to increase international support against this organization and will begin working with other countries in addition to Turkey. According to our law, if we can find evidence that will hold up in court, we will then have the right to file a case against the terrorist organization. Once forensics experts from the FBI and Turkey find evidence that will hold up in court, a case will be filed against the DHKP-C."

Efforts are still ongoing to establish evidence that will be admissible in court in both nations. Amongst the proposals to come in from the U.S. was a suggestion to distribute "Wanted" posters and offer a reward for tracking down the suspects that pose a risk of further bombings. Ankara shot down the idea due to the bounty system being illegal according to Turkish laws. Ankara says that the intelligence-gathering process is still ongoing and therefore the American method proposed could result in chasing off any members of the terrorist organization that were in contact with Ecevit Şanlı. Convincing FBI agents that they needed to proceed in their own manner, Ankara proceeded by staging a second wave operation on the DHLP-C terrorist organization in 28 different provinces.

According to Security Department sources, one of the suspects detained, a central executive board member for the Confederation of Public Workers' Unions (KESK) whose initials are A.Ş, paid a visit to both France and Belgium ten days prior to the attack. Due to the timing of suicide bomber Ecevit Şanlı's arrival to Turkey, which was immediately following this trip, police are looking into the plausibility that A.Ş. may have been involved in conducting exploratory studies in Ankara which he then relayed when abroad.

Journalist Didem Tuncay, who sustained a serious eye injury in the U.S. Embassy blast in Ankara, has been discharged from the Ankara Numune Hospital where she was receiving treatment. Prof. Dr. Nurullah Zengin announced that Tuncay was discharged by her own request the night prior and said that she would continue to receive treatment from home.

Sevil Sevimli, a young French student of Turkish origin, who was in Turkey on an exchange program in Eskişehir when she was arrested in an operation on the DHKP-C and charged with over five years in prison has returned to France. Sevil Sevimli was sentenced with five years, two months and 15 days in prison by Turkish courts for being a member of an armed organization and spreading propaganda and was banned from leaving the country. Her travel ban was recently lifted however pending an appeal and she was allowed to leave the country after paying 10,000 liras in bail.

This is a translation of an article originally written by Duygu Güvenç, Cevdet Özdemir and Alper Sancar.