A mother’s reaction to the DHKP-C 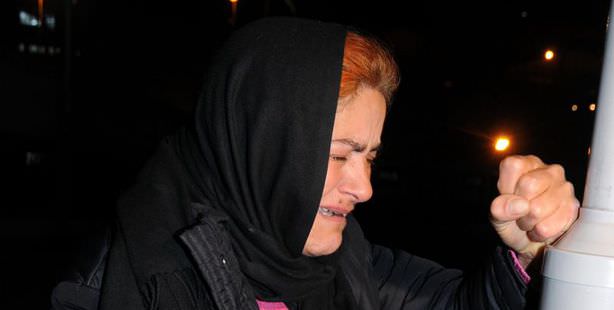 A mother came to an Istanbul courthouse to protest against the DHKP-C, claiming they deceived her daughter, who was arrested in an operation against the terrorist organization.

Gülsen Yeşilırmak, mother to Ebru Yeşilırmak, who was arrested in an operation on the far-left Revolutionary People's Liberation Front (DHKP-C) arrived to the entrance of the Istanbul Courthouse in Çağlayan to protest the DHKP-C. While the trials continue for those detained, Gülsen Yeşilırmak stood in front of the courthouse shedding tears as she explained that her daughter had been tricked by the organization.

"THEY TURN STUDENTS INTO SUICIDE BOMBERS"

Yeşilırmak stated that her daughter became a member of the association under the premise they would be offering her a scholarship while she was studying in the Biology Department of Bursa's Uludağ University. Instead, said Yeşilırmak, they deceive them into becoming revolutionaries and turn them into suicide bombers. "This dishonorable man deceived my child by saying that he was the chairman of the association and would be giving her a scholarship. They lie by saying, 'I am a revolutionary.' They exploit the impoverished. They deceive children from impoverished families and turn them into suicide bombers. This has been the end of me. There hasn't been a door that I haven't knocked on in the past five months," said Yeşilırmak.

"THEY CHOOSE THE IMPOVERISHED"

The grieving mother accused the organization of deceiving innocent students by praying on them around high schools and universities. "Mothers and fathers need to keep their eyes open against these deceitful people. They need to protect their children. These people go around universities and high schools and pick out children from poor families. They turn them off school. They end up preventing them from even going to classes. The lawyers are just as guilty as they are. My little lamb has never hurt anyone. She had no idea what was right and what was left. They deceived her by telling her they were going to give her a scholarship. She would say, 'Mother I can't break away, I can't seem to get out of this. They took away my heart," said Yeşilırmak.