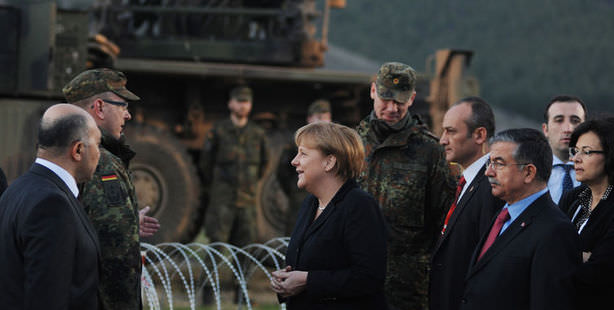 On her third official trip to Turkey since taking office, German Chancellor Merkel arrived to Turkey midday Sunday for a visit which began in Kahramanmaraş to meet with German soldiers, who are overseeing the operations of the Patriot antimissile battery systems which have been deployed to the southeastern province.

German Chancellor Angela Merkel arrived to Turkey on Sunday for a two-day trip hosted by Prime Minister Recep Tayyip Erdoğan. Merkel kicked off her trip by flying into Gaziantep Airport midday yesterday in order to pay a visit to the German soldiers serving as part of the NATO forces overseeing the deployment of Patriot anti missile systems to protect the Turkish border from potential strikes from Syria.

Merkel was joined by a crowded delegation of reporters upon her arrival to Gaziantep Airport where she was greeted by Governor Erdal Ata, Gaziantep Municipal Mayor Asım Güzelbey and Police Chief Ömer Aydın. From Gaziantep, the German Chancellor went by car to Kahramanmaraş, where she had the chance to visit the 320 soldiers overseeing the deployment and operations of Germany's Patriot missile batteries. Later in the day, Merkel moved on to Cappadocia.

MERKEL TO MEET WITH ERDOĞAN AND GÜL IN ANKARA TODAY

On Monday, German Chancellor Angela Merkel will meet with both Prime Minister Tayyip Erdoğan and Abdullah Gül. In addition to attending a Turkish-German Business Forum along with Prime Minister Erdoğan, Merkel will also be meeting with representatives from Turkey's Christian minority groups.

Although Merkel continues to defend the notion of privileged EU membership for Turkey, the German Chancellor's perspective on Turkey's EU negotiation process seems to be softening as she recently expressed that she was in favor of resuming Turkey's accession talks to revive Turkey's stalled membership bid. Meanwhile, according to government sources, Merkel will also be updated on Turkey's efforts to draft a new civilian constitution. Merkel is said to be closely following turkey's new constitution process as well as efforts regarding freedom of press and religious beliefs. The issue of cooperation against terrorist factions will also be high on the agenda and the activities of the National Socialist Underground or NSU, the far-right German terror group responsible for murdering a significant number of Turkish immigrants will also be discussed.

One of the most pressing subjects to be handled during Merkel's visit is expected to be the situation in Syria. Merkel is anticipated to express Germany's support for Turkey's stance against Syria and their solidarity by way of deploying Patriots and German soldiers to assist in the case of any potential threat to come from Syria. Merkel is also expected to discuss other current developments in the Middle East with a focus on Iraq, Afghanistan, Iran and Mali.

According to Germany's international broadcaster Deutsche Welle, the 2013 joint trade volume between Turkey and Germany is anticipated to reach 40 billion dollars. DW points out that Germany continues to be an important foreign trade partner for Turkey and that in 2012 it was the top nation Turkey exported to with foreign trade volume reaching 4.53 billion dollars. In Turkey's imports, Germany comes second only to Russia. While there are presently over 5,000 German firms operating in Turkey, by the end of the year, this figure is expected to surpass 5,500.