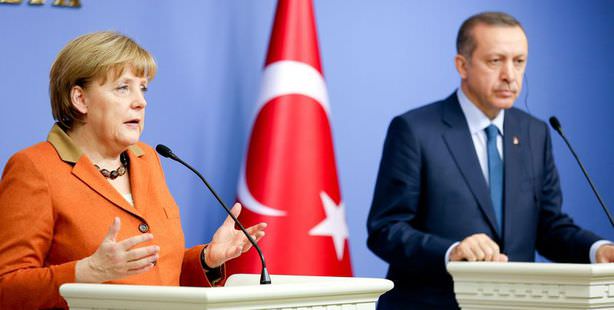 In a joint press conference with Prime Minister Erdoğan, German Chancellor Merkel pledged to support Turkey’s struggle against terrorism, by stating, "We are well aware of the PKK’s activities and will do all that we can to cooperate in the fight against terrorism.”

German Chancellor Angela Merkel says Germany will provide all the support it can to Turkey's fight against terrorism. During a two-day trip to Turkey, German Chancellor met with Prime Minister Tayyip Erdoğan in Ankara, after which the two participated in a joint press conference. Pledging Germany's support for Turkey's ongoing struggle against the PKK terrorist organization, Merkel stated the following: "We are aware that PKK representatives also work with organizations that operate under different names in an effort to further their terrorism activities. This is a very sensitive issue and we are tracking all suspects involved. When there is a request for extradition, we handle it with great sensitivity and closely investigate the issue. However, there are certain court rulings we have to abide by such as considering the suspect's conditions of arrest and conviction. If the suspect will be sentenced in Turkey to aggravated life imprisonment, then the court does not allow their extradition. We will do all that we can when it comes to the issue of terrorism. Our foreign ministry undersecretaries will meet twice a year in order to exchange information. I have also expressed that we will do everything in our power in order to shed light on the national socialist murders of Turkish immigrants," stated Merkel.

During the press conference, Merkel also remarked on Turkey's EU negotiations process by stating, "I said today that we should open a new chapter in the negotiations. I must say however, that so long as the question of the Ankara protocol, which hangs closely together with Cyprus, is not solved, we will have problems in opening as many chapters as would be perhaps good and proper," she said. Prime Minister Erdoğan responded by stating that the Ankara protocol should not be contingent to the opening of chapters and said it is an entirely separate issue. In response to a reporter's question on Merkel's stance on EU membership, the German Chancellor stated, "I have hesitations when it comes to full membership, however I want to continue this process."

When Merkel revisited the issue of signing the Ankara Agreement, Prime Minister Erdoğan said, "We are going back and forth again and have returned to the Ankara protocol. We can sign the Ankara Protocol only if the visa dialogue process with the EU is signed at the same time," Erdoğan said.

While Erdoğan qualified the meetings held with the German Chancellor as being "productive," the prime minister went on to express Turkey's gratitude to the German state for their collaboration with NATO to deploy Patriot anti-missile systems to Turkey.

Commenting on the Patriot deployment, German Chancellor Merkel stated, "They are being stationed in Turkey due to certain security concerns. If I were to speak for former Germany, Turkey was always a reliable partner for us during the cold war era. Maybe we can now repay the favor to some degree."

When a German journalist posed a question regarding jailed journalists in Turkey, Merkel responded, "We discussed the release of a new legislative package on the matter. We also expressed our sentiments that journalists should be able to work freely in Turkey and should not be detained for lengthy periods. Mr. Prime Minister proposed collaborating on the issue," said Merkel.

In Erdoğan's response to both the journalist as well as Merkel, the prime minister stated the following; "I would be greatly pleased if you would pay close attention to the answer to this question. The number of journalists arrested is less than one could count on one hand. The reason for their arrests is not based on their journalistic activities. Just how Germany needs to adhere to the ruling of the judiciary, in Turkey, the judiciary is also not subordinate to the executive, it is independent. Just recently, six journalists were arrested in England, while 50 have been arrested. Do you question them the same way you question us? I would like for you to see if they are connected in any way to the IRA," said Erdoğan.