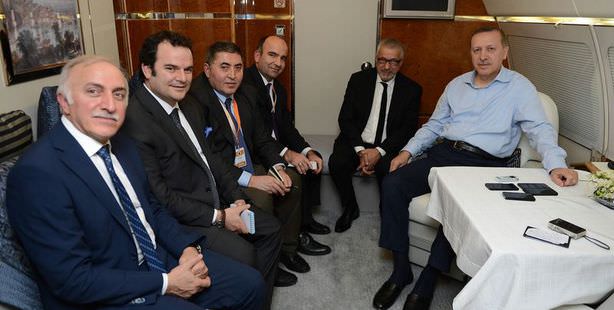 Emphasizing that the situation in Iraq and Syria cannot be compared, Prime Minister Erdoğan said, “As Turkey, we cannot allow the formation of a Northern Syria. Syria’s territorial integrity is important.”

Prime Minister Tayyip Erdoğan responded to questions from reporters accompanying him on his flight home from the United Arab Emirates. Erdoğan's focus was on the two main topics on Turkey's agenda: the crisis in Syria and Turkey's ongoing peace initiative to disarm the PKK.

* WE ARE WAITING ON A STEP FROM THE USA: "We will be discussing the situation in Syria during U.S. Secretary of State John Kerry's visit to Turkey. The United States has yet to assume any responsibility, so how far this discussion will go is what's important. It's not possible for me to say anything at present. Syria has been in turmoil for the past two years; however America has yet to present a clear stance. Although they do condemn certain actions, we are expecting more from the United States. Russia's negative stance and China's position are obvious. America needs to sit at the table with them just as much as we have if they want to reach a solution. I am not a permanent member of the UN Security Council; they are, so if they can't reach a solution then how in the world are we ever going to solve this nation's crisis? Isn't this the reason the U.N. was founded?"

* THE OIC HAS NOT COME THROUGH: "I can also say that the Organization for Islamic Cooperation and the Arab League are also subject to criticism. Neither the Arab League nor the OIC have taken on a serious position or responsibility. The burden lies heavily on both Turkey and Qatar and we are expecting support from other nations."

* THE SITUATION IN SYRIA CANNOT GO ON MUCH LONGER: "The situation in Syria cannot continue on this way. I am not of the opinion that this will go on for much longer. It seems to me like we are rounding the final bend."

* WE WILL NOT ALLOW A "NORTHERN SYRIA" TO DEVELOP: "Turkey primarily, but also Saudi Arabia, Jordan and Egypt do not want a division of Syria. Syria's territorial integrity is extremely important for us. We do not want to see Syria undergo something similar to what happened in Iraq. As Turkey, we will not allow the formation of a 'Northern Syria.' That would grant us different authority and rights. No one should allow for a situation like this to develop. They don't seem to consider the division in Iraq as what it is; instead they refer to it as a 'transition to the state system. If this is truly a transition to a state system, then why don't you consider implementing the same system for Sulaymaniyah, Kirkuk and Mosul?"

'THE PEACE PROCESS WILL TRULY BEGIN ONCE THE TERRORISTS LEAVE

* POLITICS IS TAKING RISKS: (In response to a journalist prompting, "A second delegation went to speak with the PKK leader. You took a great risk.") "Conducting politics is a great risk. However, it is impossible to reap results if this risk is not taken. If other influential circles in the community were to share some of the risks we have taken on, then we would be able to make progress much faster."

* THE TERRORIST ORGANIZATION DEMANDS 'TAXES' FROM BUSINESSMEN: "Through their aid campaigns set up in the west, unfortunately a number of our Kurdish merchant brothers are inadvertently providing financial support out of fear. The funds they collect from these forms of support are not small. Then you see that within the country they are also holding merchants in Hakkari liable for 'taxes'.'They have a side establishment called the HPG that comes and writes a receipt."

* IF THEY LEAVE THE PROCESS WILL TRULY START: "The moment the terrorists in Turkey cross the border into a different country will mean that the actual process has begun. Then there is the issue of the Makhmour Camp, which is a matter that needs to be settled with the U.N. On the other hand there is also Kandil, which is an issue that we need to solve with local Northern Iraq administration. These are all steps that will be taken once the terrorists in Turkey have deserted the country. We say 'let's not repeat the mistakes of the past.' We will take all necessary measures."