“Our ongoing brotherhood project will be an example to the world” 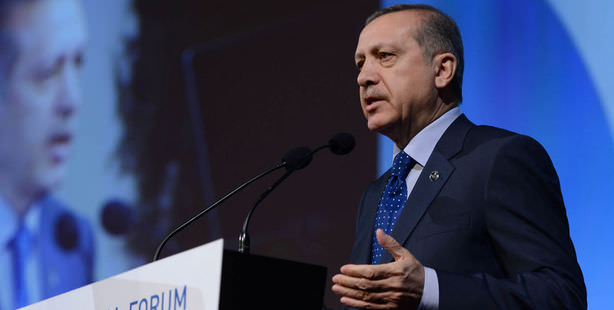 Prime Minister Erdoğan addressed the Alliance of Civilization forum during which he said that the modern world has not passed the test when it comes to the situation in Syria. Erdoğan also said the UN is in need of an immediate reform because a solution to the crisis in Syria has failed to be reached due to the objections of two nations. Prime Minister Erdoğan also said that Turkey’s ongoing brotherhood project will be an example to the world.

Prime Minister Tayyip Erdoğan delivered a series of important messages during his address at the United Nations Alliance of Civilizations (UNAOC) forum, held in the Austrian capital of Vienna.

The following is a summary of Erdoğan's speech which addressed both the ongoing peace initiative in Turkey as well as the perpetual war in Syria:

OVER 100 NATIONS ARE IN THE ALLIANCE: "I am very pleased that this year's forum is being held in one of Europe's historical capitals Vienna. It is extremely pleasing that this initiative taken by the governments of Turkey and Spain under the UN roof has now reached the level it has. This alliance, which has now garnered the support of over 100 nations and institutions, has become a unifying structure. We are now experiencing a time in which we need more alliance, reconciliation and tolerance between civilizations. We are facing a world in which racist attacks have gained momentum, terrorism has claimed more lives and religions and sects are becoming increasingly intolerant of one another."

WE CHOSE THE DIFFICULT PATH: "We had two clear choices to deal with the situation we are faced with. We were either just going to sit back and watch or we were going to take action to say 'stop'. We didn't choose the easy route, we chose the hard one. As the Alliance of Civilizations initiative, we know just how great the threat is we are faced with. Because, there is ignorance, intolerance and most importantly prejudices. However, we believe from our hearts that no matter how great the threat may be, with determined efforts it can be eradicated."

THERE ARE A NUMBER OF POSITIVE EXAMPLES: "Despite all of the negative examples, there are still a number of good ones in which people throughout have lived together in tolerance. We are pleased to see that societies and nations that see cultural, religious and ethnic variations as prosperous and not as a means for segregation and conflict, have achieved great successes in many areas."

INNOCENT CHILDREN ARE DYING IN SYRIA

A CALL FOR SUPPORT AGAINST TERRORISM: "We find it to be very important in terms of the success of the Alliance of Civilizations that the EU offer Turkey further support in the fight against terrorism. I believe that this brotherhood process, which will be regaining strength in Turkey, will present a good example to a wide geography including Europe. Turkey's EU membership would also be an extremely meaningful and important step for the success of the Alliance of Civilizations initiative."

THE INSIDIOUS DANGER NEAR US: "It is obvious that we need to direct our attentions to areas of conflict in Asia, Africa and especially the Balkans and the Middle East, which pose an insidious danger. Unfortunately the modern world has failed the test when it comes to the situation in Syria. While the death toll in Syria over the past two years nears the 70,000 mark, the fact that the world remains silent as children and women bleed to death damages any sentiments of justice."

ISLAMOPHOBIA IS A CRIME OF HUMANITY

RACISM IN EUROPE: "I must also say that the rise in racism in Europe is also a serious problem for the Alliance of Civilizations project. Unfortunately, in addition to the indifference to Muslim nations, Muslims who live in other countries are being subjected to insulting and offensive attitudes, which is heartbreaking. Just like anti-Semitism and fascism. It has now become unavoidable to not consider Islamophobia a crime against humanity."

NO REPRESENTATION IN THE UN SECURITY COUNCIL: "I want to address the entire world from here in Vienna. I ask, does the UN Security Council represent the entire world? We see three continents here, Asia, Europe and North America, other than that there are no permanent members from other continents. So, does that mean that these five members represent all of the religious groups in the world? Not at all. Do the temporary members of the UN Security Council have any true value? Everything is decided on by the five permanent members. If we are talking about an alliance of civilizations, then there needs to be an alliance formed between the permanent members of the UN Security Council. When just one member says 'no' the entire process is blocked. This is an issue that needs to be brought to the table."

THE UN NEEDS TO UNDERGO A REFORM: "Why is the problem in Syria not being solved? Because, two member nations say 'no'. Wasn't the UN formed in order to establish world peace? In that case, the UN desperately needs to undergo a reform. Lastly, the naming of Palestine as an observer member-state was truly a historical success. It was a breaking point on behalf of world peace. Our brotherhood initiative will also be a world example."

When Erdoğan was asked if he expected a ceasefire before March, the prime minister said that it was impossible to give a precise timeline, "however, our hope and our efforts exerted are for them (the PKK) to begin leaving the country soon and to relinquish their weapons. We will then have acquired the peace that our nation has been awaiting," said Erdoğan.

Prime Minister also commented on the situation in Syria by stating, "We can't say that the international community has reacted in the way we expected of it when it comes to Syria. There have been recent developments, however the efforts made by the opposition forces are way and above all forms of appreciation. Sooner or later, dictator Assad and his partisans will be goners and those who are fighting for their freedom will come out the victors."

Prime Minister Tayyip Erdoğan also delivered an address to Turkish expats in Vienna organized by Wonder (ÖNDER) an association in Vienna that assists Turkish graduates from Imam Hatip religious high schools with admittance to foreign universities and The Independent Industrialists' and Businessmen's Association (MÜSİAD). Erdoğan was speaking to an audience of Turks that had been forced to seek higher education abroad due to the unfavorable co-efficient system initiated during the February 28th era, in which university placement scores from graduates from İmam Hatip high schools were subject to a coefficient system equivalent to that applied for vocational schools.

Prime Minister Erdoğan recalled statements made by Turkey's ninth President Süleyman Demirel who had said that students wearing headscarves should go study in Saudi Arabia. "They went even further than that," said Erdoğan. "They said İmam Hatip graduates were 'bats'. Well, this nation has gone and made a 'bat' their prime minister," stated Erdoğan.

Remarking that many students sought their right to an education by heading west, where hundreds of higher education graduates ended up remaining, Erdoğan called on these "advanced" brains to return to their nation. "MÜSİAD was one of the biggest victims in the February 28th era, however I personally as well as many of my colleagues also suffered greatly. Then there is a whole other aspect of victimization that resulted. As a father I was a victim as were my two daughters because they were İmam Hatip graduates. However, just how those who painted this painful picture had an agenda, so did my God and my nation. Those who were turned away from universities 16 years ago are now running the country," said Erdoğan.

"We are paying extreme care to ensure that no one has to go through what transpired 16 years ago. I want to especially request that those who come here from Turkey to study, return to their nation after having succesfully completed their education. Do not get stuck here," said Erdoğan.