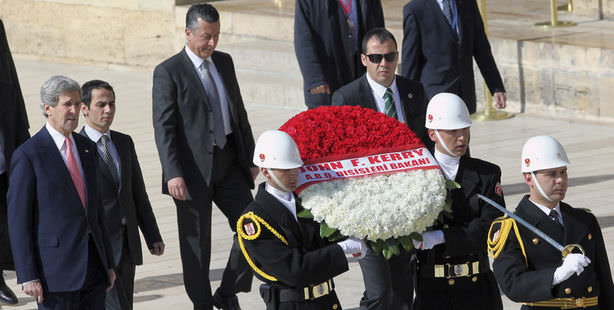 Erdoğan’s response to U.S. Secretary of State John Kerry, who criticized the Turkish prime minister for a statement he made likening Zionism to a crime against humanity: “You didn’t even make this sort of an announcement when nine of our civilians were killed.”

During a two-and-a-half meeting with visiting U.S. Secretary of State John Kerry, Prime Minister Tayyip Erdoğan reminded of the series of statements that were released in response to his criticism of Zionism, and said, "You didn't even speak out to this degree when our nine innocent civilian citizens were killed in international waters on May 31, 2010. One of the activists killed was even a U.S. citizen and you didn't condemn the attack." Erdoğan went on to say that the statements being made were not befitting the two nations' strategic cooperation and model partnership.

During the meeting, which officials say was not tense, Erdoğan delivered the following messages: "We were one of the first states to recognize Israel. We are not against Israel's existence; however we are sensitive regarding the manner of existence of the Palestinian people. We are in support of a two-state solution. If Israel is given the right to exist, then Palestine should also be given that same right."

Kerry expressed the Obama administration's determination to play an active role to establish peace in the Middle East. Kerry said that these sorts of statements (the Zionism comment), made just as they are about to embark on a new initiative, weakens their hand. Kerry said that the break in Turkey-Israel ties has made the process more difficult and that if Turkey and Israel relations were normalized, it would increase their strength in incentives for peace in the Middle East.