PM Erdoğan says women can put an end to terrorism 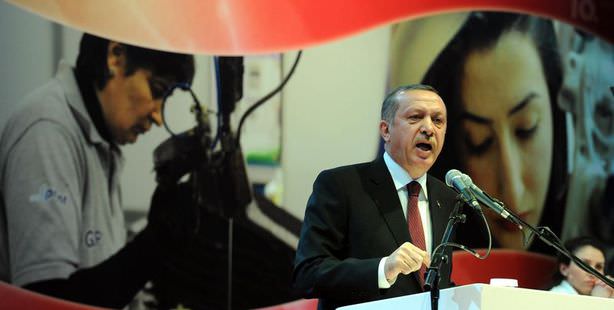 Expressing that they have turned a new page, Prime Minister Erdoğan stated, “If the women of this nation say ‘stop’, terrorism will end.” Erdoğan called on mothers to take back their children from the grip of terrorism.

Addressing an assembly of female laborers in the Turkish Metal Union, Prime Minister Tayyip Erdoğan, appealed to mothers by saying that if they were to voice their opposition to terrorism it would come to an end. "We are expecting all of the Turkish Republic's courageous women to take a stand by calling for an end to the bloodshed, tears and pain," Prime Minister Erdoğan added.

Acknowledging all of the women suffering in Africa and Palestine and offering his respect to those who have lost a child in the conflict, Prime Minister Erdoğan delivered the following messages during his touching address:

"For as long as I live in this body we will be fighting against terrorism. We will continue this struggle for women and children, despite all of the provocations, sabotage and obstacles."

"We no longer want to see mothers fearfully awaiting the return of their sons as soldiers, nor do we want mothers fearing for their sons with the PKK in the mountains. What we want is for mothers to not long after their children in the military or the mountains but to instead watch as they go to school. To women everywhere, in the north and in the south, I beg of you, please pray for this process to succeed."

"We are currently engaged in a solution process. If all of the women in this country say 'no' to terror, then terrorism would come to an end. If all of the women in this country join as one heart to say put an end to the suffering of children, then painful news would never surface. If mothers pull their children out of the grip by terrorism then this bloodshed and tears would end. No nation can ever be happy and prosperous as the women in the country suffer and the mothers cry."

"We are expecting all of the Turkish Republic's courageous women to take a stand by calling for an end to the bloodshed, tears and pain. Some say they are 'nationalists' while others say they are 'neo-nationalists' in an attempt to instill apprehension in society. We will stand brave against those conspirators and cowards trying to spread the fear of the nation dividing and we will walk courageously into the future. The shackles locked on the ankles of our nation will be removed and, God willing, then we will be able to rise up with confidence to become the greatest tenth nation in the world."