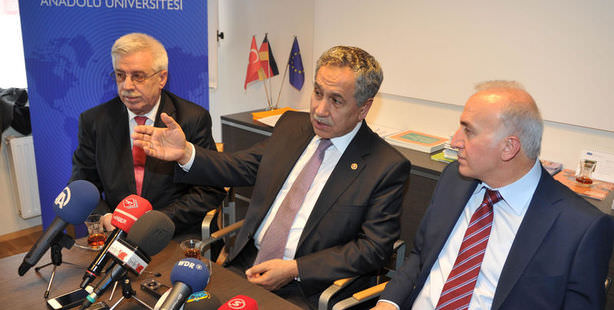 Deputy Prime Minister Arınç is calling on Turks in Germany to become foster families in order to ensure Turkish children under protection of the state maintain their culture and relationships with their biological families.

While in Cologne for a series of meetings, Deputy Prime Minister Bülent Arınç paid a visit to the Turkish state-run Turkish Radio and Television Corporation TRT's Cologne studio set up by Anadolu University and TRT. Speaking to reporters at a press conference following the launch of the new TRT studio, Arınç commented on the issue of Turkish children who are taken away from their families in Germany and given to the protection of the state. "I think the best thing to do is to encourage Turkish families to be foster families. "

Arınç said that they were well aware that the Youth departments in Germany place children under the guardianship of foster families as a result of physical abuse of neglect. "This procedure is in accordance to the laws implemented there and therefore we are not able to argue this point." What Arınç did argue however is that no matter what family the child under protection of the state is given to, they should continue to maintain a relationship with their biological family which should also be involved in the process.

Arınç delivered a message to the three-million population Turkish community residing in Germany by way of stating that the families amongst them need to consider becoming foster families. Expressing that he believes there are probably thousands of families willing to take on foster children, Arınç stated, "Please stand up for our children by becoming foster families."

Arınç also called on Turkish families to protect their identity and to ensure that while their children learn to speak German they should also learn to speak their native Turkish.