Davutoğlu meets with the “last Ottomans” 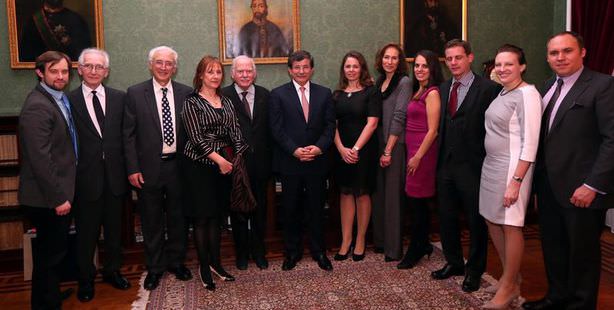 During an address at the dinner held in honor of the "last Ottoman" family at the London Embassy, Foreign Minister Ahmet Davutoğlu referred to the meeting as extremely special and of historic value and expressed how pleased he was to be able to meet with the Osmanoğlu family, which despite having lived abroad for many years have not lost their identity nor connection to Turkey. Davutoğlu also said that he wished this meeting had transpired much earlier and expressed his hopes that from here on out they will be able to meet like this more frequently.

Foreign Minister Davutoğlu went on to state that Turkish Embassies abroad are homes to the members of the Osmanoğlu family just as they are to every Turkish national and expressed how pleased he would be to host the Ottoman descendents in similar events in the future.

Grandson to Sultan Abdülmecid I, Osman Selahaddin Osmanoğlu also delivered a speech at the dinner during which he thanked Minister Davutoğlu for his kind words. Osmanoğlu said that this was an extremely emotional gesture and the first time this number of family members was able to gather in such a large group, all of which is due to Ahmet Davutoğlu's efforts for which they are endlessly grateful.

Expressing that they would also like to meet with Davutoğlu like this again in the near future, Osman Osmanoğlu said that in addition to Konya, they could also come together in Istanbul and Bursa, both sentimental locations for the Osmanoğlu family.

To see photos of the momentous event: