PM Erdoğan: Terrorism will no longer be on Turkey’s agenda 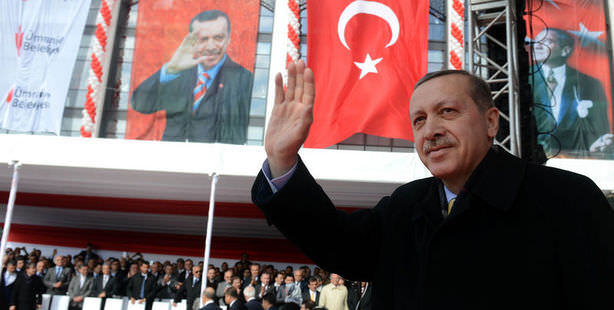 Prime Minister Erdoğan remarked on the opposition’s criticism of the ongoing peace initiative to put an end to terrorism by stating, “They weren’t able to solve the issue of terrorism while in power, nor are they able to as the opposition. Through discrimination they have alienated the citizens from the state.”

Commenting on the opposition's debate regarding the ongoing process to ensure the disarmament of the PKK terrorist organization during an address at a launch of a new municipality building in Istanbul, Prime Minister Erdoğan stated, "Racism, nationalism and tribalism notions are diabolical and following in the path of evil. They have offended the nation with this discrimination. Through looking down upon, disregarding and neglecting the children of this nation they have alienated them from the state. For 30 years now terrorism has never divided the members of this nation and it will not be able to do so in the future."

Prime Minister Tayyip Erdoğan relayed the following messages during a talk delivered at the opening ceremony of the Ümraniye Municipality:

"Racism, nationalism and tribalism have never sown discord amongst the members of this nation, nor will they ever in the future. Just how we came to power through our perception and insight, united and as one, we will continue on in solidarity on our same path of brotherhood."

"Pay no heed to the lies, slander and hearsay surfaced by the opposition. Never give credence to the opposition's attempts to portray what hasn't transpired as if it has, their attempts at distortion and inadvertently conveying their intentions. For 30 years now, this opposition has never produced a solution to terrorism and they have always obstructed those who did. They weren't able to solve the issue of terrorism while in power, nor are they able to as the opposition."

"No matter what they try to do… We will be acting with our nation and walking on this path with our people and hopefully will be eradicating the issue of terrorism from this nation's agenda. While they discuss how 'it can't happen', we will be talking about how 'it can' and hopefully we will raise our sense of brotherhood."

"A significant portion of the issues Turkey faces today are the result of discriminatory policies implemented in the past. They have divided our people from amongst themselves. They called them Turks, Kurds, Laz, Circassians, Georgian, Bosnian and Romanians. They failed to provide services, claiming excessive distance. They didn't go to these regions themselves. When it came to them taking on a task, they did so through considering the voting results. They would look to see where they won the votes and where they didn't and acted accordingly."

"They have offended the nation with this discrimination. They damaged the trust between citizens and the government and set up barriers. Through looking down upon, disregarding and neglecting the children of this nation they have alienated them from the state," stated Erdoğan.