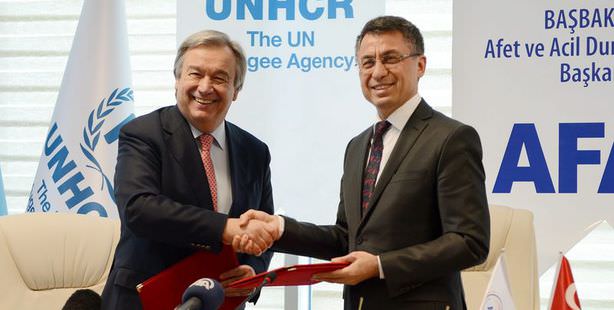 The Prime Ministry’s Disaster and Emergency Management Directorate (AFAD) Chairman Fuat Oktay states that according to calculations based on UN standards, Turkey has spent 1.5 billion dollars on hosting Syrian refugees.

The UNHCR and AFAD signed a protocol on Monday to coordinate efforts for Syrian refugees outside of the camps, such as jointly opening a mobile communication center to register Syrian refugees fleeing to Turkey and to coordinate efforts to provide shelter. Oktay says that they hope to be able to gather all those who want to offer assistance and all those in need under the same roof.

A DROP IN THE OCEAN

UN High Commissioner for Refugees Antonio Guterres says this mechanism will be both innovative as well as a system to act as an example for the world. "We have a small, symbolic contribution in this project, which of course is nothing compared to the volume of the project in itself and of the resources provided by the Turkish government. It is a drop of water in an ocean, but also a drop that comes from the heart," stated Guterres.