Police in southeast Turkey are learning to speak Kurdish 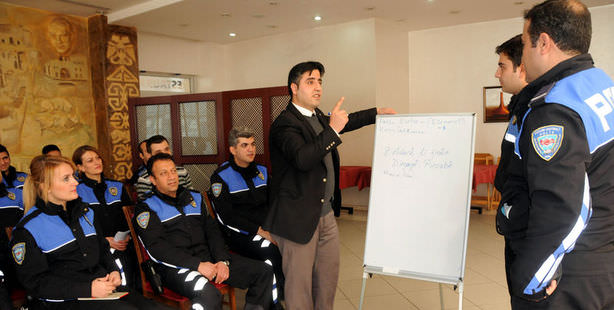 Police Chief Recep Güven, who was recently reappointed to Diyarbakır after serving in the southeastern province from 1991-1996; years where terrorism had intensified in the region, applied to the Security General Directorate to request officers be given the opportunity to learn Kurdish. Güven's request was approved and soon after Kurdish language courses began to be offered for police officers. Ninety police officers in the Community Policing Department applied to attend the Kurdish language courses offered. Classes are held at the end of shifts and police are being taught a series of regularly used words and phrases in Kurdish. Police officers were taught how to ask an individual for their identification, their address or to conduct a search. Police officers are now practicing their new skills on the streets. Once they have completed a 20-hour course, officers will be given a certificate accrediting them with the ability to 'speak Kurdish'.

THIS WILL CONTRIBUTE TO THE SOLUTION PROCESS

Commenting on the development, Community Police Department Chief Dr. Mustafa Dönmez, stated, "If we want to learn about the lifestyle of a culture living in a community, then we need to learn to speak their language. This new move for police to learn to speak Kurdish has been well-received. We also feel that it will have a positive effect on the solution process. This sort of approach will have a significantly positive effect on the public. On April 10th Police Day, we will be hanging up posters in both Kurdish and Turkish," said the police chief.

KURDISH AND ARABIC LESSONS IN SİİRT

Through a project initiated by the Siirt Community Police Department, officers are now being offered courses in both Arabic and Kurdish. Bureau Chief Mustafa Durmaz states, "In our Western provinces, our personnel are taught to speak languages such as English, German and Russian in order to communicate with tourists, whereas, in this region, our people speak both Kurdish and Arabic. As a result, we have decided to learn enough Kurdish and Arabic to be able to get by and communicate."
The Batman Police Department has hired 30 police officers who speak Kurdish, where they have been assigned to the Community Department '155' Police Emergency Line and Juvenile Department.

'POLICE LEARNING KURDISH IS THE SIGN OF A NEW ERA'

Merchant Ramazan Peker: "This is a procedure that should have been implemented a long time ago. We are extremely pleased. Citizens will be able to more comfortably explain their problems and difficulties suffered."

University student Mahmut Ekin: "There were numerous prohibitions when it came to Kurdish. People weren't able to speak Kurdish in official offices. In my opinion, for police to take this initiative to learn to speak Kurdish is a sign of a new era."

Tourism professional Mehmet Gültaşlı: "A significant number of citizens who do not speak Turkish faced great difficulties expressing themselves and their issues when they went to police departments. Seeing police officers speak Kurdish has pleased us greatly."

'THIS MAKES OUR WORK EASIER'

Police Officer İlyas Şekerci: "We are constantly embedded in the public. It is important to be able to communicate in Kurdish even if it is just to ask how someone is doing. This allows us to understand situations better and therefore makes conducting our work more comfortable."

Police Officer Çağrı Samur: "In situations concerning maintaining public order, we are able to easily communicate with people. Because people feel closer to those they can speak their own languages with they are able to further assist us."

This is a translation of an article originally written by Hüseyin Kacar and Nasrettin Guneş.