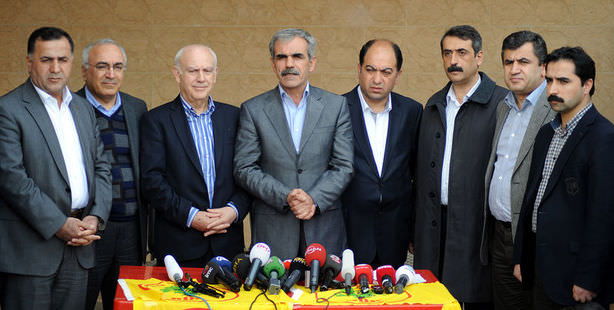 The PKK will be handing over eight public officials held captive by the terrorist organization today to a delegation including BDP members that is presently waiting in Erbil for the transaction to take place.

A six-member delegation assigned to take on the handover of the public officials, some of which have been held captive by the PKK terrorist organization for years, crossed over the Habur Border Gate yesterday and later arrived in Erbil.

The delegation includes deputies Hüsamettin Zenderlioğlu and Adil Kurt from the pro-Kurdish opposition Peace and Democracy Party (BDP), President of the Human Rights Association (İHD) Öztürk Türkdoğan and İHD Diyarbakır Branch President Raci Bilici, the president of the Organization of Human Rights and Solidarity for Oppressed People (MAZLUM-DER) Ahmet Faruk Ünsal and his deputy Selahattin Çoban. Also included in the delegation was BDP member Sebahat Tuncel, however with a court ban on leaving the country, she was forced to remain in Şırnak. Tuncel has been the suspect in a six-year trial for being a member of a terrorist organization. Last year she was sentenced to eight years for the crime. BDP Hakkari Deputy Adil Kurt told reporters that they want to ensure this process is conducted securely and that the captives are safely returned to their families as soon as possible.

The delegation was greeted at the Habur Border Gate on Tuesday by the BDP's Erbil representative Cemal Coşkun. Later, the delegation moved on to Erbil. While the delegation's security has been taken on by the Northern Iraqi Kurdish Regional Government, the actual site where the captives will be handed over is being kept top secret. The Kurdish administration has provided the delegation with an armored vehicle entitled 'Monika' and has also given them a signal jammer device. The Peshmerga is in charge of ensuring the delegation's safety on the streets.

Although the terrorist organization was expected to hand over the eight public officials on Tuesday, BDP's Tuncel made an announcement yesterday morning that due to the present conditions the handover would be postponed until Wednesday. According to Tuncel, the release of the kidnapped officials will be a positive contribution to the ongoing process to reach a solution to the Kurdish issue.

The delegation is taking delicate care to ensure today's hand-over of the PKK's captives to their families transpires smoothly. Paying significant heed to the government's warning this transaction not turn into a second Habur incident, the delegation has cancelled a meeting previously scheduled to take place in Diyarbakır. The Habur incident referred to is of a 2009 handover of a group of PKK members to Turkish authorities at the Habur gate. Although the move at the time was deemed groundbreaking and may have lead to the PKK's disarmament, supporters of the terrorist organization instead turned the incident into a show of force, staging massive demonstrations. Taking into consideration the sensitivity of the ongoing process, the delegation has also decided to refrain from presenting the detained public officials to the press at this time.

This is a translation of an article originally written by Hazal Ateş and Özgür Cebe.