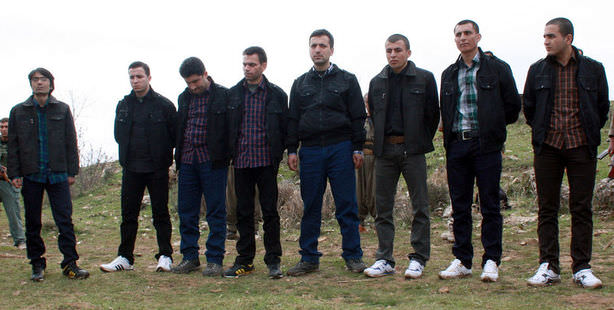 The PKK terrorist organization freed a group of Turkish soldiers and public officials who they had been holding captive in the mountains of northern Iraq for more than a year on Wednesday, the first concrete step in efforts to end their 28-year-old insurgency.

The six soldiers, a police officer and a local official looked in good health and wore clean clothes as they were handed to a delegation of Turkish rights activists and pro-Kurdish politicians on the remote Sargali plain.

The delegation was protected by Peshmerga, armed Kurdish fighters, as they made their way to the top secret location for the handover where they were greeted by PKK militant council member Süleyman Şahin, who uses the code name 'Baver', and a large crowd of PKK members. A while later, the eight captives were brought to the meeting point and after a signing ceremony on a small plain near the town of Amadiyah, the detainees were handed over to the delegation from Turkey. The captives, who appeared to be in good health and wearing clean clothes, were being brought back across the border into southeast Turkey to be reunited with their families.

During the signing ceremony, PKK member Şahin said, "Following the orders of our leader, (Öcalan), we are handing over these eight captives to the delegation that has arrived. Our intentions here are entirely to contribute to the ongoing process. The soldiers were never subjected to negative treatment and their release is entirely humanitarian-based. Their health is very good and a medical team has examined them. This operation is proof that we don't want war," stated PKK-member Şahin.

Once the paperwork was signed, the group held hostage consisting of soldiers and public officials were handed over to the delegation, which they hugged, shook hands and kissed in a series of warm greetings.

PKK terrorist Süleyman Şahin also intended to shake hands with the captives released. However, the group held prisoner by the PKK announced that they had made a joint decision to not shake Şahin's hand due to his being responsible for giving the orders of an attack in 2009 in Reşadiye, Tokat, which resulted in the deaths of seven soldiers.

640 days – Sergeant Abdullah Söpçeler was abducted on the Diyarbakır-Lice highway on July 9th, 2011.

640 days – Specialized Sergeant Zihni Koç was abducted in Lice, Diyarbakır on July 8, 2011. When Koç was reunited with his family yesterday, he was greatly saddened by hearing the tragic news of his mother's death during his time in captivity.

Under a plan discussed by Öcalan and the government in Ankara, the PKK would end hostilities and withdraw its fighters from Turkey as a prelude to disarmament in exchange for greater Kurdish rights, enshrined in the constitution.

A third delegation of pro-Kurdish politicians is scheduled to visit Öcalan on İmrali island in the Marmara Sea in the coming days to give him the responses of PKK leaders in northern Iraq and Europe to his proposed plan. During that visit Öcalan is expected to make a call for a ceasefire to go into effect from the Kurdish New Year on March 21, and could also call for the withdrawal of PKK militants from Turkish territory.