Davutoğlu’s response to the U.S. Congress: “We don’t owe anyone an apology” 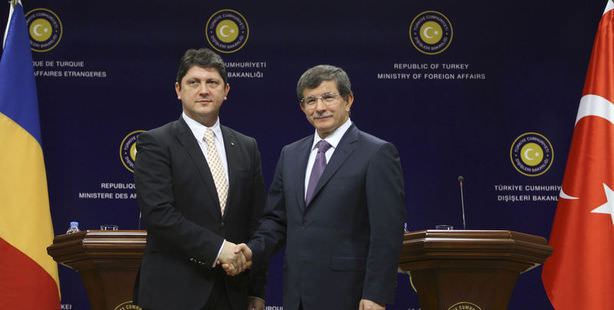 Foreign Minister Davutoğlu commented on the U.S. Congress requesting Erdoğan retract a statement he made likening Zionism to crimes against humanity: “We do not owe anyone an explanation, our stance on the issue is clear.”

Commenting on a letter penned by members of the United States Congress requesting Erdoğan retract his statement, in which he offered up a comparison of Zionism to crimes against humanity, Foreign Minister Ahmet Davutoğlu stated, "We do not owe anyone an apology."

Davutoğlu held a joint press conference with his visiting Romanian counterpart Titus Corlatean after the two foreign ministers met in Ankara. It was during this new conference when Davutoğlu responded to the criticism surrounding Erdoğan's statement and the penning of a letter by certain members of the U.S. Congress requesting the prime minister retract his statement. Davutoğlu stated that Turkey's perspective was relayed in full to U.S. Secretary of State John Kerry during his recent trip to Turkey.

Davutoğlu said that although there may have been widespread reactions, in respect to statements the Prime Minister has made in the past, no one should have any question that Erdoğan is one of the world's most outspoken leaders when it comes to anti-Semitism.

Davutoğlu went on to state following: "Our stance on these issues is clear, we are against anti-Semitism. However, we have always been the ones to speak out the loudest against Israel's regional expansionist policies and their aggressive stance as a result. No one should have any concerns. In this regard, Turkey doesn't owe an explanation to anyone in its record of history," stated Davutoğlu adding that Turkey has been a safe haven for the Jewish community over the past 600 years as they suffered from ghettos and the Holocaust in Europe.

"From here on out our door will continue to remain open for every community that faces challenges in human rights. No one should try to exploit these issues in an effort to tarnish Turkey's clean record. Once again, nobody should try to use these means in an attempt to seek approval or excuses for Israel's extremely aggressive stance," said Davutoğlu.

Foreign Minister Davutoğlu spoke with his U.S. counterpart Kerry over the phone the other day in a conversation which focused on the latest situation in Syria. Kerry relayed his impressions of Egypt, Saudi Arabia and the UAE during the conversation which lasted approximately 20 minutes. Kerry also shared how he witnessed grave concern for the crisis in Syria in these regions and mentioned that efforts are still ongoing to put an end to the bloodshed. Davutoğlu also raised his concerns about the prolonged crisis in Syria and mentioned that the number of refugees seeking shelter in Turkey is growing daily. Davutoğlu and Kerry resumed the discussion yesterday at the U.S. Secretary of State's request and both expressed how beneficial they find being in close contact on the issues unfolding in the region.

Yesterday, Davutoğlu hosted UN Under-Secretary-General for Humanitarian Affairs Valerie Amos in his office in Ankara. During the meeting the two discussed the humanitarian crisis in Syria and potential ways of collaboration between Turkey and the UN.

Israel set to complain to Obama about Turkey

Israel feels that they have accommodated Turkey's demands for an apology and compensation to the victims of the Mavi Marmara raid and believes that it is now Ankara's turn to make a move, a concern Israel plans to relay to U.S. President Barack Obama during his impending trip to Palestine. In response to Turkey's demand Israel lift the blockade on Gaza, Israel says that the major issue is not one that should be made a contingent for Turkish-Israel relations.