An avalanche of reactions against the Israeli lobby 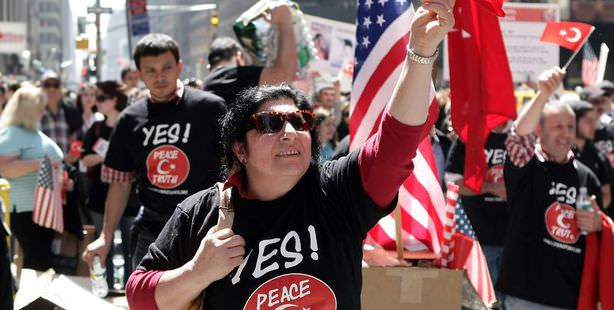 Reactions are escalating in response to a campaign staged against Erdoğan by the Israeli lobby in the United States. While Turkey’s Foreign Ministry is broaching the issue with the U.S. administration, international Turkish associations are issuing their own response of reproach.

Turkey's reaction is escalating to an ad campaign staged by the American Freedom Defense Initiative (AFDI), which is known for its close affiliation with Israel, qualifying Prime Minister Recep Tayyip Erdoğan in the same category as radical Islamists.

The main messages being delivered in responses to the statements coming in from both Ankara and Washington is that, "to have the freedom to advertise is one thing, however to place the Prime Minister in the same category as a terrorist leader is a whole other matter. This goes way beyond violating the right to promote. We do not find this campaign to be excusable in any manner."

"We, Turkish Americans, express our deepest concern regarding a misleading and malicious campaign ad sponsored by the so-called American Freedom Defense Initiative (AFDI). This ad, which has appeared in the public transportation systems of some major American cities, is a part of an ill-conceived campaign that juxtaposes the Prime Minister of Turkey with international terrorists, among them Osama Bin Laden.

We condemn AFDI and its act of diluting the meaning of terrorism, as well as for honoring actual terrorists and their hateful discourse by including in the same ad campaign, the Prime Minister of Turkey who is a friend to the American people, and the leader of a key NATO ally and partner of the United States," read the statement released last week.

This latest campaign by the American Freedom Defense Initiative has been spurred by comments made by Erdoğan in an Alliance of Civilizations forum in Vienna in which he likened Zionism to crimes of humanity. The AFDI's response involved posters with sentences of prose from a poem by Ziya Gökalp which Erdoğan read at a public address which led to a prison conviction. Under the verses, "The mosques are our barracks, the domes our helmets, the minarets our bayonets and the faithful our soldiers," is the slogan, "That's My Jihad. What's yours?" The AFDI's paid campaign, which includes a photograph of Erdoğan, is now plastered on the sides of public buses in a variety of U.S. cities.