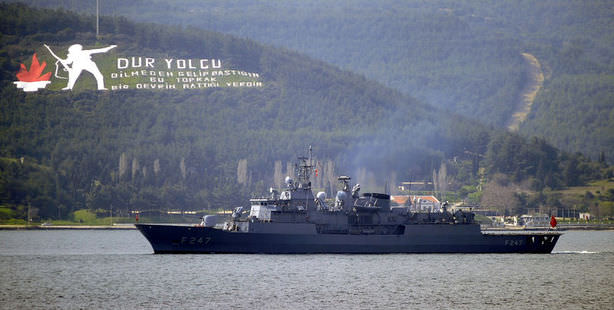 Addressing the public in Çanakkale last night, Prime Minister Erdoğan stated that the Gallipoli Campaign offers one of the most concise examples of the determination to live in independence and in liberty and hailed the unparalleled heroism of the Dardanelles Naval Victory, which is commemorated in Turkey on March 18, Martyrs’ Day.

Today marks the 98th anniversary of the March 18, 1915 Dardanelles Naval Victory in which Ottoman troops sunk three British and French battleships and damaged another with mines, inflicting 700 casualties on the British-French fleet. The Dardanelles Naval Victory was a precursor to the Battle of Gallipoli, which is also referred to as the Gallipoli Campaign or the Battle of Çanakkale, which began on April 25, 1915 and lasted until January 9 1916. The Dardanelles operation was orchestrated by a joint British and French fleet in an attempt to capture the Ottoman capital of Constantinople, which is now Istanbul, and to secure a sea route to Russia.

The Gallipoli campaign resonated profoundly among all nations involved and was the first major battle undertaken in the war by Australians and New Zealanders in the allied forces. For Turkey, the battle is considered to be a defining moment in Ottoman- Turkish history, laying the grounds for the Turkish War of Independence and the foundation of the Republic of Turkey eight years later by Mustafa Kemal Atatürk, who was a commander in the Gallipoli Campaign.

Prime Minister Tayyip Erdoğan arrived to Çanakkale on Sunday in order to address the public as well as to participate in commemoration ceremonies held today for the historic battle, which he emphasized is a unique legend of heroism. "This legendary victory undoubtedly sets a precedent for all societies suffering from oppression and servitude," stated Erdoğan.

"The sacred trust bestowed to us by our martyrs will be protected forever and we will exert all of our power to ensure we raise this level of trust even higher," said Erdoğan, who is joined by Interior Minister Muammer Güler, Health Minister Mehmet Müezzinoğlu, Defense Minister İsmet Yılmaz, Education Minister Nabi Avcı, Forestry and Water Affairs Minister Veysel Eroğlu and Transportation Minister Binali Yıldırım on the prime minister's first trip since recovering from influenza, which forced him to cancel his schedule for five days.

General Özel: We paid for every inch of land with blood

Chief of General Staff Gen. Necdet Özel also released a message in honor of the historical military victory, stating, "It is undoubtedly our martyrs who made this land invaluable and sacred by paying for every inch of it with their blood and lives. They are also the immortal heroes of our nation's creation, unity and patriotism. Today is a day in which we respectfully commemorate our saintly martyrs who gave their lives to ensure that we today and throughout Turkish history can live in a country with liberty and independence," stated Özel.

Pakistani volunteers in the Ottoman front

Photographs of Muhammed Ali Jahar, one of the founders of the Khilafat movement, which was established by Indian Muslims as a form of support to the Ottomans, have surfaced through his granddaughter Fatıma Sıddık. Sıddık's father and uncle, both medical officers, volunteered in Ottoman land from 1911-1915. Sıddık says the two were in Çanakkale as a part of a front by Palestine and the Balkans.