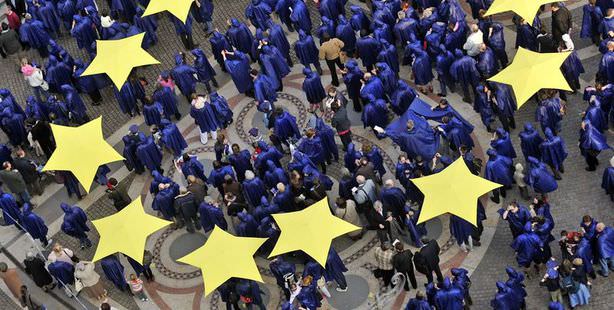 The European Court of Human Rights has ruled that due to the presence of convincing evidence of attempts to topple the government in the Sledgehammer (Balyoz) case, “The detainment period is normal, and the arrests are not arbitrary."

The European Court of Human Rights (ECHR) has delivered a 'sledgehammer' ruling in the Balyoz case, which is currently awaiting a decision by the Supreme Court of Appeals. The Balyoz case, also referred to as the Sledgehammer case is regarding a series of attempts to create chaos in the nation to destabilize the government.

The ECHR assessment that the evidence in the case warrants the extended period of detention comes as a result of an application filed by Brigadier General Cem Aziz Çakmak, who has been sentenced to 18 years imprisonment in the Sledgehammer (Balyoz) case, which was tried at the Istanbul High Criminal Court.

On September 3rd, 2010, Çakmak filed an application to the ECHR citing he was being subjected to an "unfair trial", "a long detention period" and "limitations on his rights to a defense". The ECHR looked over Çakmak's application during a meeting on February 19th, in which Turkish Judge Işıl Karakaş was also in attendance, and found the file to be "unacceptable". In the decision released, which also included excerpts from the indictment in the Sledgehammer (Balyoz) case, the following statements were issued regarding the allegations of "an extended detentions period" and an "unfair trial":

THE EVIDENCE IS CONVINCING: The ECHR is of the opinion that the criminal case for which the applicant is facing prosecution contains convincing information which to an objective observer could point to the applicant having committed the crime in question.

CREDIBLE REASON FOR DETAINMENT: It was decided that the applicant was arrested and detained based on 'credible reasons' for suspicion a crime was committed.

EXISTENCE OF SERIOUS PROOF: The ECHR has observed that due to the serious reasons and implications as well as concrete evidence for the charges faced, the national judiciary has detained the applicant based on the provisions in the Penal Code.

NEITHER ARBITRARY NOR UNREASONABLE: For which the applicant qualifies as an illegal detainment period, the court is of the opinion that the implementation and interpretation of the legal provisions set forth by the national authorities in this concrete case are neither arbitrary nor unreasonable.

TRIAL PERIOD IS ACCEPTABLE: (Taking the date of application into consideration) The trial process has been ongoing for approximately the past three years. The ECHR feels that in light of the established judicial opinion, the trial period is not extensive and as implied fulfills an "appropriate term".