'Ankara bombings were an attack on the solution process' 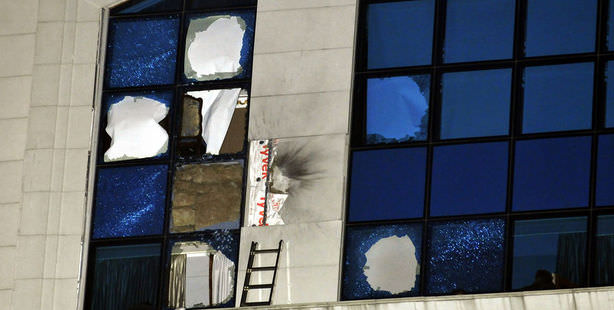 Turkey's justice ministry and the offices of its ruling AK Party were attacked with homemade bombs and a LAW rocket in the capital Ankara on Tuesday, days ahead of an expected ceasefire with PKK terrorists. AK Party Deputy Chairman Çelik says the attacks were staged against democracy, law and the volition to reach a solution.

In Ankara on Tuesday night, the Ministry of Justice and the ruling AK Party (Justice and Development Party) headquarters were attacked with bombs and a LAW rocket. Prime Minister Tayyip Erdoğan received the news shortly after he departed Ankara on an official trip to Denmark and Holland.

The first attack transpired at around nine p.m. Tuesday evening when two hand grenade devices exploded in an area right behind the security checkpoint at the entrance of the Ministry of Justice. The explosion created significant noise and injured a wife of an Interior Ministry staff member.

At the same time, an attack using a LAW rocket staged from a park across the street shattered windows on the seventh floor of the AK Party building, where Prime Minister Erdoğan has an office. The attack on the AK Party headquarters only caused material damage to the façade of the building.

According to the information obtained, the perpetrators left behind a LAW light anti-tank weapon and a flag of the far-leftist group Revolutionary People's Liberation Party-Front (DHKP-C). Police immediately began inspecting all city surveillance footage and were shortly able to determine the identity of the attacker.

From Denmark, Prime Minister Erdoğan was briefed by Justice Minister Sadullah Ergin and Interior Minister Muammer Güler over the phone. Commenting on the attack, Minister of Justice Ergin stated, "Turkey is currently going through an important period. Whenever Turkey has embarked on an era of change or initiative we have always been faced with these sorts of provocative activities. We are cautious against attacks such as these."

'WE KNOW WHO IS RESPONSIBLE'

Speaking at a news conference held with Interior Minister Muammer Güler, AK Party Deputy Chairman Hüseyin Çelik stated the following: "These bombs and LAW rockets will not derail the ruling administration which has represented the national will for over ten years now, the AK Party, from its path of serving the nation. This attack was not one directed at the AK Party; it was an attack on democracy. The attack on the Justice Ministry was an attack staged against democracy, law and the volition to reach a solution. While Turkey exerts the will to put an end to its children dying and its mothers crying, this was an attack staged to derail the peace process."

Interior Minister Güler said, "We have some conjectures however we cannot say who was behind these explosions until we have reached a definite conclusion. We know who was responsible and will act when proven. In general, these are enemies of democracy."

Tuesday's explosions occurred two days ahead of an expected ceasefire call by jailed Kurdish rebel leader Abdullah Öcalan, who has been in talks with state officials to try to end a three-decade conflict that has killed some 40,000 people. The ceasefire call, expected to coincide with the Kurdish New Year on Thursday, would be a major step in what is shaping up to be the most serious bid yet to end Turkey's conflict with PKK terrorists.