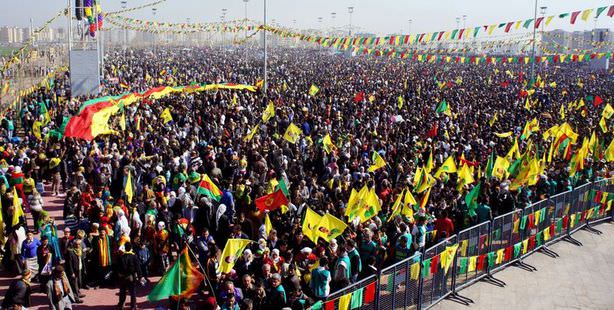 Abdullah Öcalan, the imprisoned leader of the PKK terrorist organization, has released a highly anticipated message that was delivered at Thursday’s Nevruz celebrations in Diyarbakır. “This is the start of a new era,” says Öcalan.

The highly anticipated message from Abdullah Öcalan, the jailed leader of the PKK terrorist organization, was read aloud at a ceremony held in Diyarbakır for Nevruz, the Kurdish New Year. In his message, Öcalan calls for the silencing of weapons and for politics to dominate, and states, "This is the start of a new era."

The written message provided by Abdullah Öcalan, which comes following a series of ongoing peace talks held with the imprisoned PKK leader to put an end to the terrorist organization's violent activities in Turkey was first read aloud in Kurdish by Pervin Buldan.

Öcalan offered his greetings to the Kurdish public, which he said was one of the most ancient societies to live on Mesopotamian and Anatolian soil.

Following Pervin Buldan's reading in Kurdish, Sırrı Süreyya Önder read out the letter in Turkish from which the following are a series of excerpts:

"I want to wish all of the downtrodden a happy Nevruz.

Greetings to the brotherhood of two people. With the brightness of this new day, we celebrate Nevruz altogether.

For thousands of years the fire of Nevruz has been growing in the hearts of millions.
Right now I can see that my scream is heard everywhere. My resistance was against helplessness, ignorance and bondage. Our fight wasn't against any ethnicity or religion. Our fight has been against all forms of injustice, pressure and oppression.

Today we awake to a new Turkey and a new Middle East. Today marks the beginning of a new era. We have sacrificed ourselves for this public for years. This sacrifice, this struggle was not without reason.

They have pitted the Arab, Persian, Turkish and Kurdish people against one another. I am beginning a new era today in front of millions of witnesses. The stage has been reached where our armed forces should withdraw beyond the borders. Let the guns be silenced and politics dominate. This is not the end; this is the start of a new era.

Those who are listening to me carefully, today is the beginning of a new era. An era of democratic rights, freedom and equality is beginning.

Let the weapons be silenced. Let the bloodshed of the Turkish and Kurdish people stop. Let politics operate and not weapons. Drop your weapons and leave the country's borders. We are making a transition from an armed struggle to a democratic one.

Kurds should discuss their organization in a national conference. We are aiming to establish a new model. Let us altogether establish a democratic and modern system. Let all colors have a place in this system of democratic modernism.

Turks and Kurds died as martyrs together in Çanakkale. Then they formed the 1920 Assembly together. The reality of our shared past is that we have to also establish our joint future together.

This is a time for unity and not one for conflict. This is the time for alliance and embracing one another in unity. Those who trust in me should take into consideration the sensitivity of the process up until the very end. This is not giving up on the struggle; this is the start of a new one. I am calling on an end to the oppression.

Greetings to those who support this process, support a democratic solution and support peace. We will protect our brotherhood and unity of the people against marginalizing policies. Denial and assimilation politics never gained strength from the public.

Responsibility befalls on everyone to ensure that people live unified together. This is not the end; this is the beginning of a new era."