Israel is ready to take a step back in the Mediterranean 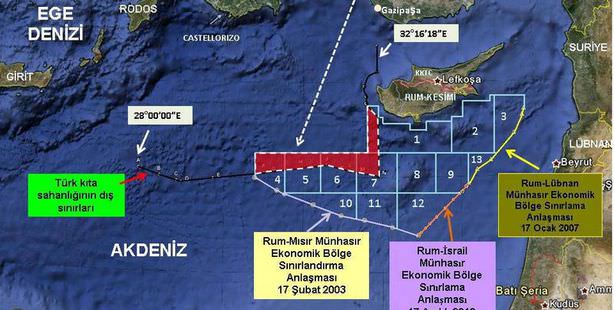 Prior to last week’s apology, Israel had been testing the waters in Ankara. Sharing the distribution of the natural gas found in the Mediterranean and transporting it to Europe is the main item on Israel’s agenda.

Now that Israel has apologized, they are seeking ways to expedite the process of normalizing relations with Turkey. One of the most significant issues of contention with Turkey is Israel's collaboration with Greek Cyprus in exploring for oil in the Eastern Mediterranean. However, Israel is now saying that their ties with Greek Cyprus are not as close and strong as assumed. According to information obtained, the change in direction of Israel's policies is in part due to the economic bankruptcy suffered in the Greek Cypriot economy. The high costs involved in transporting gas from the Mediterranean to Europe from outside of Turkey coupled by the announcement from the United States that the gas found in the Eastern Mediterranean should belong to all of Cyprus were determining factors.

INITIATIVES TAKEN PRIOR TO APOLOGY

According to sources, while U.S. Secretary of State John Kerry attempted to conduct diplomacy on Israel offering an apology, at the same time, Israeli diplomats were also involved in a series of meeting traffic in Ankara. Israeli diplomats emphasized economic collaboration, while the main item on the agenda remained to be the cooperation between the Israeli and Greek administrations. Israeli diplomats relayed their unwillingness to sacrifice relations with Turkey for the ongoing cooperation with Greek Cyprus. Especially when it comes to the issue of collaboration in the Mediterranean, Israeli diplomats relayed a clear message by saying, "We do not have the strong relations that you may think we have with the Greek administration."

According to the information obtained, the United States will be presenting a solution proposal in order to ensure the contention in the Mediterranean does not obstruct the normalization process. U.S. Department of State Spokesman Victoria Nuland's statement, "We continue to believe that the island's oil and gas resources, like all of its resources, should be equitably shared between the communities in the context of an overall solution," offers the first signs of their impending proposal.

Israel and Greek Cyprus are dependent on Turkey when it comes to transporting the natural gas reserves in the Mediterranean, speculated to be equal to about five billion barrels of petroleum. Transporting the reserves to Europe in any method which excludes Turkey will result in extremely inflated costs, of which there is no possibility the Greek administration would be able to take on. In order to transport the gas either a ten billion dollar liquefying natural gas (LNG) facility will be established in the Mediterranean or otherwise the gas could be transported through Libya and Italy to reach Europe. The second alternative appears nearly impossible due to both security issues as well as the extensive costs compared to using Turkey.

Due to the lack of a solution to the uncertainty surrounding the exporting route of the gas procured, Israel has yet to take a step for investing. If the issue is solved and all uncertainties rectified, then the path will also be cleared for investments to be made in the production of oil from the Mediterranean.

Israeli Minister of Justice Tzipi Livni has called Foreign Minister Ahmet Davutoğlu to discuss the issue of compensation being paid out to the victims of the Mavi Marmara raid, one of the conditions set forth by Turkey in order for relations with Israel to normalize. The discussion dealt with determining the amount of compensation to be paid and the ongoing efforts on the matter. It was decided that officials from both nations will meet in order to further discuss the issue of reparations to be paid by Israel.