“We will be exposing the nations that support terrorism” 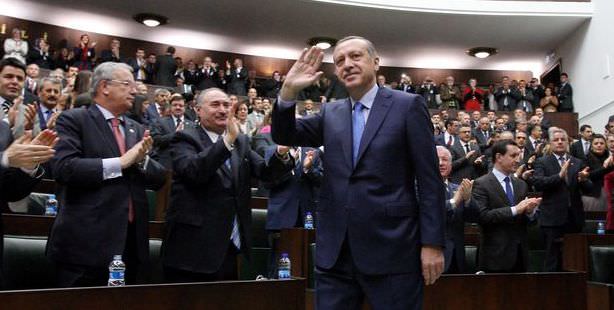 Erdoğan stated yesterday that they will be releasing the names of nations that have offered support to the far-left Revolutionary People’s Liberation Front (DHKP-C). “We have documentation that will mortify these nations to the world.”

Speaking to an assembly of AK Party lawmakers, Prime Minister Tayyip Erdoğan revealed that they have acquired information proving that there are nations which offer support for the DHKP-C terrorist organization, also known as the Revolutionary People's Liberation Front. The DHKP-C has claimed responsibility for the recent attacks of the AK Party Headquarters and the Ministry of Justice in Ankara. "We will be displaying proof through documentation in international platforms of which nations are offering support to the terrorist organization. We will be mortifying them to the world," said Erdoğan.

• "Whatever we do, we do it for Turkey. As you can see, the climate has changed within just one to two months. During this time, license applications for investments in the Southeast have increased by 40 to one."

• "With documentation, will be exposing in international platforms the nations that support the DHKP-C terrorist organization, which was responsible for the attacks on the AK Party and the Ministry of Justice. We will be pursuing the nations that are offering external support to the organization and will be shaming them to the world. In every international meeting, we will be exposing these nations, with documentation and photographs."

• (Commenting on setting up a panel of public opinion leaders to assist in the ongoing peace process with the PKK terrorist organization.) "Now there is widespread speculation regarding a series of individuals that may be considered to take part in the "wise man" panel. However, these names are not in our pool. If we are going to embark upon such a project, the decisions will not be made by the media. We are the ones responsible and we are the ones that will be held accountable. When we embark on something we are accountable for we give ourselves to the task entirely. We will be looking into who will draw a response from society. It would be best to use the term 'wise people' due to the inclusion of female candidates in the committee. If we decide to establish this formation, we will be taking a step that encompasses a 780,000 square-meter area. They will not be an enforcing power; instead they will act as an advising council for us. We will be using their support during the process in order to provide direction for the perception of the community."

(On Netanyahu's apology) "The conversation took place with Obama as witness. We have put an end to this issue. However, we will be tracking whether or not they keep their promises. We will be taking steps according to the developments."

Prime Minister Recep Tayyip Erdoğan published a message celebrating the Jewish Passover holiday. "All segments of society are free to celebrate their own religions, traditions and customs as has always been the case in the past. I want to offer my best wishes for all Jews, and especially our own citizens, on this week of celebrations for the Passover holiday," stated Erdoğan.

On April 10th, Prime Minister Recep Tayyip Erdoğan heads to Mongolia, where he will be the recipient of the 'International Bilge Khan World Peace Award for his contribution to world peace. Erdoğan, who has been selected by an award committee comprised of parliamentarians and academics from Central Asia, the Middle East and the Balkans, will receive the award in a ceremony which will take place in front of the Orkhon inscriptions, which are symbolic for the Turkish world. The head of the Eurasian Development Platform Hasan Cengiz says that Erdoğan is one of the rare leaders who practices the motto, "Peace at home, peace in the world."