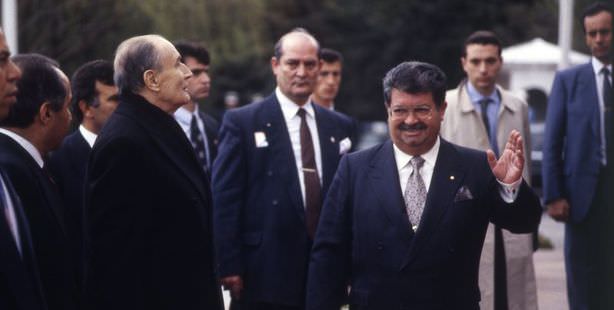 The Ankara Chief Public Prosecution office has interrogated a general who is currently a suspect in the Ergenekon trial for his possible involvement in the organized murder of former President Turgut Özal.
Turkey's eighth president Turgut Özal, died of heart failure on April 17, 1993 while still in office. Last year, an investigation was initiated into Özal's death following claims of unusual circumstances and the possibility the former president may have been poisoned. Özal's remains were exhumed as part of the investigation and the Council of Forensic Medicine (ATK) submitted a report confirming the presence of poisonous substances.

As part of the investigation launched by the Ankara Chief Public Prosecution office, on March 29, 2013, General Levent Ersöz was interrogated at the Çapa Tıp Fakültesi (Çapa Medical School Hospital) in Istanbul.

Ersöz was asked to testify based on the statement, "It has been ascertained that as part of the activities of the illegal armed terrorist organization you were a part of, you were involved in the murder by poisoning of Turkey's eighth President Turgut Özal on April 17, 1993."

In the three-hour interrogation based on the record of statement which read, "You are here to be asked to testify as part of an investigation and as a suspect in the assassination of a President in office and for killing a President," Ersöz rejected all claims put forth against him.

The record of statement for which the interrogation was based on includes the fact that when the President fell ill there was no doctor present to attend to him in addition to a number of unusual circumstances that delayed an appropriate responsive treatment, and states, "Considering the discrepancies between the events that transpired on the day the late former President fell ill at the Presidential Palace which led to his death, as well as in the basic facts as revealed by testimonies, there is strong suspicion that the late President was the victim of an organized murder."

This is a translation of an article originally written by Veli Sarıboğa.