Turkey is solving the terrorism problem in the east 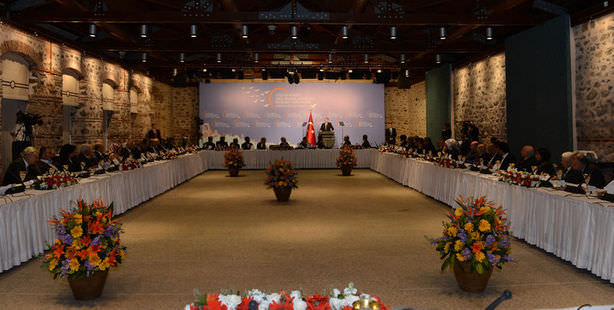 Addressing the first meeting of “wise persons”, selected amongst popular public figures in the arts, media, academia, business and political worlds and assigned to inform the public on the ongoing peace process, Erdoğan said, “Up until now you have given your notes on Turkey and written poems about the challenges in this country. Now, I am expecting your support in solving these very issues.”

Prime Minister Tayyip Erdoğan held the first meeting of the "wise persons" commission tasked with informing the public on the ongoing peace initiative, at Istanbul's Dolmabahçe palace. "The history between Turks and Kurds is not based on 29 years, it spans back for a thousand years. This is not the time to emphasize division; it is the time to emphasize partnerships. It is not the time to put forth pain and suffering, it is a time of joint victories, a time in which shared joys should prevail," said Erdoğan.

Referring to the participants as representatives of 76 million, Prime Minister Erdoğan thanked them for responding affirmatively and putting their hearts into the shared goal of reaching a solution which has developed into what he deemed "gangrene."

WE ARE WAITING ON A NEW ROLE: "For years you have acted in our films and pulled our heartstrings with your songs. Together, our businessmen and businesswomen have produced us. Our unions, our associations and our foundations have joined us in defending our rights. Up until today you have addressed Turkey's issues and drawn attention to them. We are now waiting on your support for and contribution to our initiative to solve these issues that you have made films on and penned on paper," said Erdoğan.

IT IS A TIME FOR US ALL TO EMBRACE: "During this time, it will not suffice for just the state to embrace this issue; it is now time for all of us together to embrace a solution. This is not the time to emphasize separation; it is a time to emphasize partnership. It is not a time to put forth our pain, it is a time to exhibit our shared victory and joy," said Erdoğan, referring to the era as a time of social restoration.