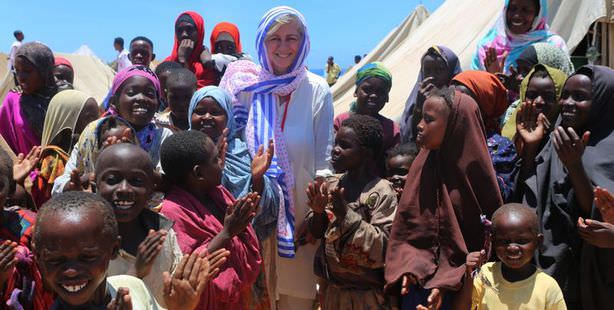 Turkey’s Red Crescent camp set up in Somalia serves 28,000 people. The Red Crescent distributes food to 10,000 people as well as provides for the meals at the hospitals, orphanages and schools.

Perhaps the greatest steps taken to curtail the starvation in Somalia were done so by Turkey's Red Crescent. The vision of children consisting of just skin and bones is now no longer due to the mobile kitchens set up a year and a half ago. In addition to delivering food to 10,000 people the Red Crescent also distributes food to the hospital, orphanage and boarding schools. The greatest support the Red Crescent has provided was in the way of setting up a camp to accommodate 28,000 people. Those forced to abandon their homes due to the drought and living face to face with death due to the civil war are now provided for in a mega camp set up along the ocean coast. Doctors Worldwide come to treat the public. Security for the Red Crescent is provided by a 30-member team of private Somalian guards. Even with this high level of protection, just last week a Somalian translator was killed.

TURKEY TOOK A RISK TO HELP

Serdar Günel, the head of the delegation organizing the efforts in Somalia has been on the job for the past nine months. Günel explains the work they have done thus far by stating, "A year and a half ago we weren't able to even take step due to the bullet cartridges. Half of the city had been demolished and we weren't able to enter the area where the Turkish Embassy is located because it was announced as a liberated zone. Somalia has now begun to breathe again due to the investments that have come in. People say that Turkey was their greatest saviors. Turkey takes a risk by assisting the country and Somalia is recovering fast."

Despite all of the investments however Somalia is still lacking in many areas.

CLEAN WATER: Somalia still does not have a laboratory in which they can test to determine the bacteria present in Somalia's drinking water. In other words, it is still not known whether drinking water in Somalia is consumable or not. The country's drinking water will be tested for the first time at the hospital to be opened by the Health Ministry. The hope is to be able to prevent the development of fatal cases of malaria.

VACCINATIONS: Children are still not being vaccinated. Soon children will be vaccinated regularly in the hopes that premature deaths can be prevented.

CANCER PROTECTION: Somalia still does not have a single mammogram machine. The early detection of cancer is a great luxury in this country. In Somalia people die from the same cancer that 80 percent of patients in Turkey are treated for and recover from. The new hospital will also contain a cancer treatment center.

MONEY: Due to the fact that the last time money was printed in Somalia was in 1991, there no longer remains any cash. The money that is around does not have much value. Everyone has tiny cell phones and conducts their shopping through sending in airtime minutes. Due to their cost, electricity, water and internet services are considered a luxury. While the Health Ministry's hospital was being built, children would line up against the walls in order to take advantage of the light to read their books and study. Other than that, none of the homes have electricity.

The number of teenage mothers in Somalia is extensive. Girls are married off at the age of 14 and by the time they turn 15 they have their first babies. Eight year-old girls who have undergone female circumcision eventually tend to suffer urinary incontinence. The husbands and even the families of these women sometimes abandon them. For the first time ever, Turkish doctors have begun treating patients such as these to a 90 percent success rate. Not only are these women treated for their medical conditions, but their life standards are also improved as a result.

This is a translation of an article originally written by Esra Tüzün and Emin Özmen.