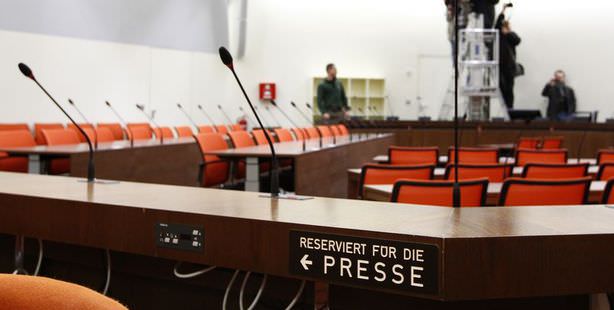 Germany’s Constitutional Court has ruled in favor of a complaint filed by SABAH regarding the lack of allocating seats to the Turkish press to witness the upcoming NSU trial on a series of ten Neo-Nazi murders in which eight Turks were killed. As a result of SABAH’s complaint and the court ruling in favor, members of the Turkish press will now be allowed to attend the trial which begins on April 17.

SABAH filed a complaint to the German Constitutional Court earlier this week to contest the failure to provide accreditation for Turkish press members for the April 17th trial in a Munich Court of the sole living member of the Neo-Nazi National Socialist Underground, responsible for killing ten individuals in Germany, eight of which were of Turkish origin. Germany's Constitutional Court has ruled in favor of SABAH and judges announced their decision Friday night at six p.m. The court concurred that there were extraneous issues concerning the issuing of accreditation and the failure of the Munich court to provide an appropriate number of seats to representatives from the Turkish press was a violation of equality. The Constitutional Court ruling also said that the Munich Court should "provide an appropriate number of seats to representatives of the foreign media with a special connection to the victims of the accused."

SABAH Europe Editor-in-Chief Ismail Erel had filed the complaint based on the fact that members of the Turkish press were not given the same timely information as other German press organs regarding the first-come, first-serve basis of the 50 seats accredited, all which went to members of the German press. Referring to the fact that the Turkish press was informed late of the practice, the Constitutional Court ruling said that they had justified expectations to be able to attend this highly controversial trial in which an overwhelming majority of the victims are of Turkish heritage.

The Constitutional Court ruling stated that it would be possible for the Munich court to open an additional contingent of at least three spots to be allocated to the Turkish press. As a result of SABAH's complaint filing and its approval, the Turkish press will now be able to witness the highly controversial trial.

THE COURTROOM IS READY

The trial of the sole remaining member of the NSU begins next week at the Higher State Court of Munich. Beate Zschaepe as well as accomplices are facing charges in relation to the murdering of ten people between the years 2000 to 2007. Of the ten people killed, eight were of Turkish heritage, one individual was of Greek origin and one was a German policewoman. Two members of the group; Uwe Bohnhardt and Uwe Mundlos, committed suicide in November of 2011 after a failed bank robbery attempt. The courtroom where the trial will be held in the Higher State Court of Munich has been opened to the public. According to officials 1.25 million Euros in expenses have been paid out in connection to the trial which will also include Turkish translation of the ongoings throughout the hearing.