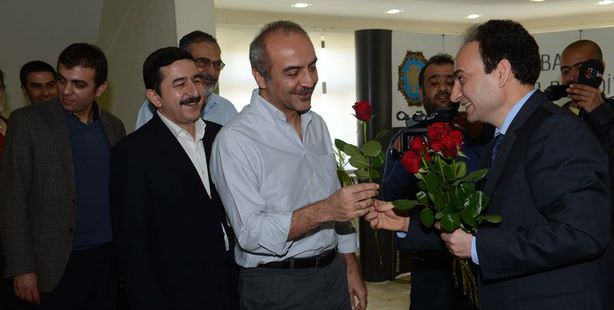 The “Wise Persons’ Commission”, formed by the government to take on the role of informing the public of the ongoing peace initiative to put an end to the decades-old Kurdish issue, have officially begun meeting and making rounds of visits throughout the country.

The government has selected members of a "Wise Persons' Commission" from amongst well known public, academic, business and political figures, that have been assigned to one of seven sub-groups that represent the nation's distinct geographical regions. The commission is tasked with informing the public of the ongoing peace initiative to disarm the PKK terrorist organization and ensure its militants withdraw from Turkey's borders.

The Southeast sub-group of the Wise Persons' Commission, which includes actor and director Yılmaz Erdoğan and academic Murat Belge, met in Diyarbakır yesterday to conduct their first official round of meetings. The committee, chaired by the Foundation for Political, Economic and Social Research Director Yılmaz Ensaroğlu paid visits to the pro-Kurdish Peace and Democracy Party (BDP), the ruling Justice and Development Party (AK Party), the Republican People's Party (CHP) and Diyarbakır Mayor Osman Baydemir, who welcomed them with roses. The committee also met with independent deputies Ahmet Türk and Aysel Tuğluk.

Responding to questions from the press following the meeting with the main opposition CHP, Yılmaz Erdoğan said that individual polemics need not pose an obstacle to the ongoing processes. "There are very important meetings being held here and we are pursuing a calm balance," said Erdoğan.

The Eastern Sub-group of the Wise Person's Commission, chaired by The President of the Turkish Economic and Social Studies Foundation Can Peker spoke with citizens after the Friday prayer held in Harput, Elazığ province and held a meeting with the academic staff of Fırat University. The Central Anatolian sub group will commence meetings with NGO's in Konya tomorrow. The Mediterranean region subgroup, chaired by the Turkish Union of Chambers and Commodity Exchanges (TOBB) President Rifat Hisarciklioglu, will also begin meeting this weekend.