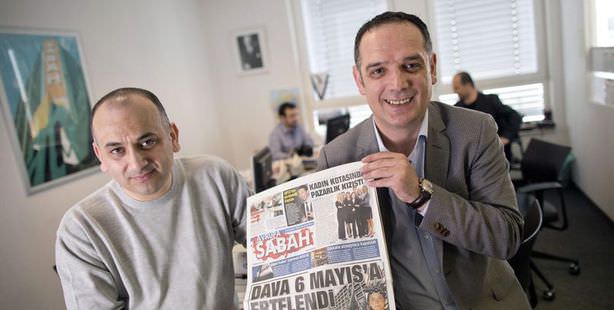 By applying to the German Federal Constitutional Court, SABAH newspaper has single-handedly become the reason the Turkish press will now be able to witness the highly controversial NSU trial. This has not gone unnoticed by the German press which has been covering the story as front-page news.

A number of leading newspapers in Germany provided wide coverage of the postponement of the Neo-Nazi National Socialist Underground (NSU) trial by a Munich court in order to reissue accreditation as a result of a ruling by Germany's Constitutional Court favoring a complaint filed by SABAH.

The trial of the sole remaining living member of the Neo-Nazi National Socialist Underground (NSU), which is being charged with the racist-motivated murders of ten individuals, eight of which were of Turkish origin, one who was Greek and a German policeman was originally scheduled to begin today, however the Higher State Court of Munich has postponed the trial until May 6th in order to accommodate a ruling by the Constitutional Court to allow the allocation of additional seats for members of the foreign press.

In the initial accreditation process, only 50 press members were reserved seats to witness the trial, and all went to members of the German press. Due to the high number of casualties being of Turkish origin, the Turkish press was understandably concerned and SABAH Europe filed a complaint with German's Constitutional Court in order to rectify the situation. The court ruled in SABAH's favor, announcing that the lack of accreditation to members of the foreign press was a violation of equality. The Munich Court in response has decided to reissue accreditation accordingly and as a result has postponed the start of the highly controversial trial to May 6th.

Leading German publications announced the Federal Constitutional Court ruling in favor of SABAH's complaint as being the reason behind the trial being postponed in order for a new process of accreditation to be initiated. Bild newspaper published an article entitled, "The chronology of the disgrace of law," which listed the mistakes made on behalf of the Munich State Court. The Bild article wrote that the ruling issued by the Federal Constitutional Court in response to a case filed by SABAH newspaper on April 6th, has resulted in the court where the NSU trial will be heard having to accept the fact that the manner in which accreditation was processed was conducted in error.

The Frankfurter Rundschau newspaper qualified the recent postponement of the trial as yet another ring in the chain of errors conducted in the investigation of the NSU terrorist cell, which is being charged with having committed serial racist-motivated murders. "As for the allocation of seats, SABAH's application to the Federal Constitutional Court was ruled just. In order to provide space for Turkish reporters, the court has had to cancel the first hearing and has gone back to the beginning," wrote the article in the Frankfurter Rundschau.

The Süddeutsche Zeitung was yet another daily which pointed to the fact that seats were not allocated to the Turkish press as being the reason behind the trial's postponement. The newspaper went on to write, "This situation was taken to the Federal Constitutional Court and SABAH, which requested the accreditation process be done over, was found to be in the right."

The German news agency dpa also submitted an article in which they introduced SABAH Europe as being the newspaper that filed a case with the Constitutional Court in regards to the NSU trial. Dpa interviewed SABAH Europe Chief Editor Mikdat Karaalioğlu and Deputy Chief Editor İsmail Erel in an article which was released with eight photographs.

FAMILIES TO BE COMPENSATED FOR COSTS INCURRED

Beate Merk, the justice minister of the southern state of Bavaria has announced that the Ministry of Justice will be compensating those who will suffer financial losses due to the postponement of the trial to May 6th. Ombudsman Barbara John, who was assigned by the German government to assist victims of the NSU as well as the families of those who were killed, had requested that the expenses derived as a result of the postponement of the trial be compensated for. Due to the timing coinciding with the International Trade fair in Munich, prices for accommodation in even the city's lower-standard hotels has reached 500 euros a night.