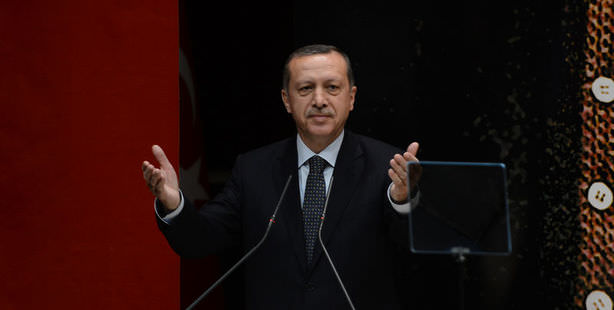 Erdoğan held a meeting with deputies from Aegean provinces to discuss the ongoing resolution process, during which he said, “We are writing history.”

Prime Minister Recep Tayyip Erdoğan held a meeting with deputies from Aegean provinces on Thursday in order to discuss the ongoing resolution process. The notion of 'migrant psychology' was a recurring theme during the meeting, in which Erdoğan emphasized that the opposition has always neglected the sensitivities of the Balkans who have immigrated to the Aegean region. "A future cannot be built on fear," said Erdoğan.

During the meeting, Prime Minister Erdoğan relayed the following messages:

"At present, in a true sense, we are writing history. We need to work more intensely in the field.

Values such as the belief in the homeland, nation and flag can easily be exploited. After the Balkan War, a majority of our citizens relocated to the Aegean region. Therefore, a number of our citizens here are apprehensive. However, a future cannot be built on fear. The governorships and security units in the Aegean should further extend the hand of compassion.

We have not made any concessions for terrorism. They could not document nor prove any such allegation. There have been no negotiations. Some say, 'The state has lost out to the PKK and are appeasing the terrorist organization.' We could respond with the best answer; however it will do nothing other than to serve as a provocation. If we were to respond to everything that is said, then we wouldn't be able to ensure this process transpires soundly. The opposition is well aware of that and therefore they are continuing to pursue this manner in order to render a deadlock.

You will see that there will be a series of different developments amongst the CHP (main opposition Republican People's Party).

You cannot get anywhere with a party chairman that provokes citizens. Those who are against the peace process will melt away like a snowball.

Someone we do not know or are familiar with could be perceived as the enemy. Therefore, we need to increase student trips between the east and the west in order to ensure we are more familiar with one another."