“My visit will further strengthen the sense of brotherhood amongst us” 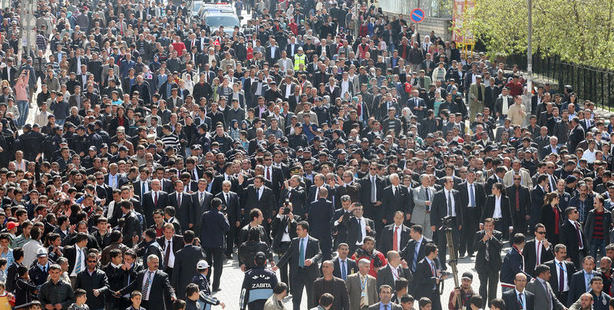 Becoming the first president to visit the eastern province of Muş in 29 years, Gül stated, “I believe that my visit will only further strengthen the sense of brotherhood that exists amongst our citizens.”

Gül was accompanied by huge crowds that had come out to welcome the president's arrival as he made his way to his first stop which was the Muş Governorship building. Reminding that after he was elected president he paid his first visits to East and Southeast provinces, Gül said that during these trips he was always able to witness the public's devotion to the state. President Gül went on to state, "As Turkey, we are truly experiencing great developments together during this ongoing period in which I have been able to fulfill this trip. I believe that the brotherhood that already exists in Turkey is strengthening even further as the wind of brotherhood is blowing much more forcefully. Turkey literally longs for peace and harmony and we are able to openly witness this desire on the streets. I believe that my visit will serve to only further strengthen the sense of brotherhood that already exists amongst the citizens of Turkey.

A LONGED FOR PHOTOGRAPH

Accompanied by Development Minister Yılmaz and BDP Deputy Sakık, President Abdullah Gül also addressed a huge crowd gathered in the square in front of the municipal building. "Of course you would like to see this photograph of us altogether with your deputies. If we can perceive diversities as prosperity then we will all be brothers. This land, this nation, is all of ours," said Gül.

Muş Governor Çınar remarked that knowing President Gül does not accept gifts, they have instead chosen to plant 5,000 trees in honor of his visit. On Friday, Gül will be moving on to pay a visit to the neighboring province of Bingöl.