PKK to begin withdrawal on May 8th 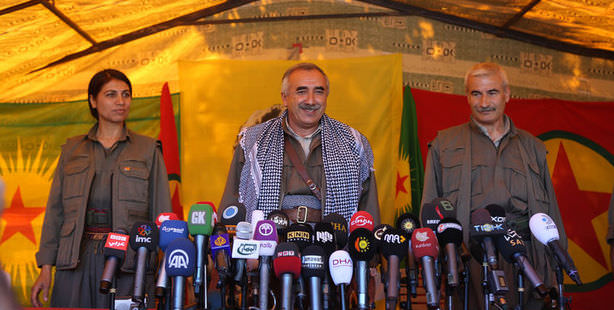 The commander of the PKK’s armed wing has responded to the call for unarmed politics and for the terrorist organization to withdraw: “We will begin the withdrawal on May 8. We will withdraw our militants gradually, however the ceasefire will remain. The process will be overseen by independent committees who will prevent any errors from occurring,” stated Karayılan.

In a highly anticipated press conference held yesterday by the PKK's leaders in Kandil, Murat Karayılan ordered his fighters to begin withdrawing from Turkish soil within two weeks and rebase in the mountains of northern Iraq as part of a peace plan with Ankara to end the-decades-old conflict.

Murat Karayılan, the supposed Executive Council President of the Kurdish Communities Union (KCK), the armed wing of the PKK announced the May 8th withdrawal date yesterday as being a result of the declaration released by the imprisoned PKK leader Abdullah Öcalan on March 21, 2013 during celebrations in Diyarbakir for Nevruz, the Kurdish New Year. "While continuing to abide by the ceasefire position we adopted in March, we will unhesitatingly be embracing and fulfilling the call for our withdrawal from Turkey's borders with the necessary determination and joint volition," said Karayılan.

"It is the ultimate goal shared by all of us who desire peace, brotherhood, democracy and freedom to successfully accomplish this historic step which will enable a solution to the Kurdish issue, will bring democracy to Turkey and will pave the way for peace in the Middle East," said Karayılan, who later dictated a formula they had devised of six items that will ensure the process is not disrupted. The following are the six-items suggested in the formula:

"Our fighters will be withdrawing via previously established and well-traveled routes they have been using for awhile now; they will be leaving on their initiative and without giving rise to any form of conflict.

The withdrawal is planned to be done gradually in groups and targeted to be completed in the shortest possible time.

We are expecting the autonomous Kurdish Regional Government (KRG) and other related authorities to show the necessary understanding regarding the presence of the militants that will be withdrawing.

During the withdrawal process, the Turkish military forces must act with the same sensitivity and gravity. In the event of any military operations being staged against the militants, the withdrawal will immediately be halted and the militants will use the legitimate right of defense to retaliate.

During the withdrawal, the Turkish security forces should not conduct any sort of provocation that could lead to a military activity or conflict. In order for the process to transpire healthily and successfully the conditions expressed in the letter should be paid heed to.

For the withdrawal process to be observed by independent committees will allow for any possible errors to be established and will ensure the process develops healthily."

Karayılan disclosed details of what he said was a three-stage process. He said the second stage after the withdrawal of PKK fighters related mainly to the "obligations of the state and the government", specifically the question of constitutional reform. "It is vital that a constitution is created which ends the denial of the Kurdish people, accepts the existence and freedom of the Kurdish people and guarantees the rights and freedoms of all identities, beliefs and denominations," he said. The third stage would be disarmament; something the Turkish government had said should precede the pullout.

This is a translation of an article originally written by Müjgan Halis and İlhami Yıldırım.