Assad found to have used phosphorus bombs on Syrian children 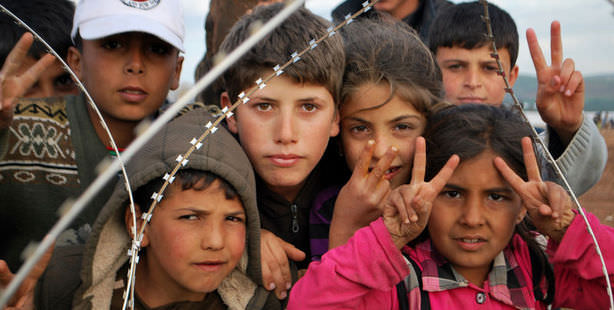 When doctors treated five Syrian children who were brought into a hospital in Hatay in critical condition, they detected signs of chemical warfare. These children’s symptoms were so extreme that doctors made a point of noting in their patients’ folders that they suspected their ailments were cause by phosphorus bombs.

The grave results found by doctors examining children being brought in from Syria are now being shared with security units. According to findings relayed to SABAH, Syrian President Bashar al-Assad has most likely tested chemical warfare on children in the country.

While speculation is rampant that Assad may have used 'phosphorus' as a chemical weapon, information is coming in that doctors have come across a number of findings they have never seen before in their examinations of the children being brought in.

BLEEDING AT A TOUCH

A month-and-a-half-ago five Syrian children were brought to a hospital in Hatay with respiratory complaints. The children were found to be suffering from acute respiratory failure and needed to be put on urgent respiratory support. When the children were undressed, doctors found themselves faced with yet another grave discovery as the children's bodies had turned yellow. In addition, wherever the doctors touched the children, their skin began to bleed. The children's INR values were off the charts when they began to bleed despite not having suffered any form of blow or trauma. While trying to attach the respiratory tube, the doctors were faced with yet another shocking discovery. When the children opened their mouths, their teeth were invisible due to the extensive amount of blood in their mouths.

The initial finding was that the children were suffering from liver failure. However, doctors said, "Liver failure is not something that is evident in four to five-year-old children. In order for this to transpire they must have had a tumor from childbirth or their gall bladder must have failed. For this situation to occur in five children at the same time is impossible." When doctors combined all of their findings, they were left with just one possible cause: "chemical weapons".

Doctors began discussing what their course of action should be however; they were unable to treat these children's respiratory bleeding. Being faced with a situation such as this for the first time ever, after an approximate hour-long examination, they decided that the hospital they were at did not have the capability to provide for these children's treatment and therefore the patients would have to be transferred to a pediatric gastroenterology department at a university hospital. The children were flown to a general university hospital by an ambulance helicopter. In their files was the note, "suspicion of being subjected to a phosphorus bomb."

While these unfortunate children continue to receive treatment, according to the information obtained, all of the findings and test results from the general hospital will be reported to security officials. A detailed investigation will be conducted for their report and the location where these children were subjected to such chemicals will be determined. After a thorough investigation, information of this inhumane attack will be announced to the world in order for the necessary steps to be taken.

IN THE GLOBAL PRESS…

Suspicion that Bashar al-Assad's regime has used sarin gas against Syrian civilians is increasing. According to eye-witnesses, the patients being treated in hospitals are presenting the reality that the Syrian regime has committed inhumane crimes. Most recently, images of patients foaming at the mouth who have been admitted to hospitals following numerous attacks in Damascus and Aleppo have been reflected as proof in global media that chemical warfare is at play.

The following are the symptoms suffered by five Syrian children:

*Yellowish skin, liver failure
*Incessant bleeding in the respiratory system as well as the mouth
*Bleeding at the site of where skin is touched.
*Acute respiratory failure