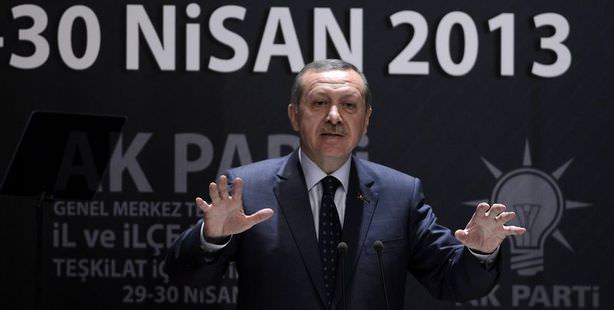 Speaking at a Justice and Development Party (AK Party) provincial and district chairmen meeting held in Kızılcahamam, Prime Minister Recep Tayyip Erdoğan delivered the following messages on the presidential system and the ongoing resolution process and dished out criticism to opposition parties for acting under the auspice of the Labor Party:

* "2014 will be an election year for Turkey that will reap critical results. First of all, hopefully local elections will take place in March. Then, the presidential elections are expected to take place in the middle of the year. Also during this time frame hopefully the efforts to draft a new constitution will have been completed and the constitution will be put to a referendum.

THE SYCAMORE TREE OF THE REPUBLIC

* We have strengthened the connection between the Sycamore tree of the Republic and its roots, branches and leaves. Status quo parties unfortunately have always chosen to perceive that huge sycamore as simply a weak sprig.

* For the past ten years, certain people have continuously repeated like parrots that the foundation of the Republic is being rocked and Turkey divided. The opposite of whatever they have said is what has always transpired over the past ten years.

* A wall-like front has developed with every step we have taken. No matter what we do, they have always stood against us. CHP (Republican People's Party), MHP (Nationalist Movement Party), Turkey's Communist Party and retired politicians and those who have been buried by the poll booth have all embraced each other once again under the Labor Party's (İşçi Partisi) leadership. Those who were once referred to as shepherds have now become the Labor Party's sheep. The supposedly patriotic CHP has become the pawn of the Labor Party, while the so-called nationalist MHP has become a substitute to the Labor Party.

* Once again, they hurl insults, slander and accusations. The MHP is unable to provide a satisfactory response to allegations they have become a substitute to the Labor Party. They are unable to because there is such an alliance.

* Right now, everyone can see that there are a handful of plunderers in cities that are working in cohorts with the Labor party and supposedly MHP to stage acts against the Wise Persons' Delegations. The leader of the Labor Party, who is currently incarcerated in Silivri, was photographed arm in arm with the terrorist organization's (PKK) leader in the Beka Valley in the 1990's.

*They were also in a union during the eras they took on the political stage. They would appear to be in conflict in order to keep the crooked system and the status quo alive. They had just one branch to cling to and that was terrorism. Now that is also coming to an end and so they are experiencing the flustering of having lost their last form of shelter.

* Throughout the resolution process, we have never taken any initiative that would shame Turkey. I am addressing those attempting to portray that we are bargaining with the PKK leader. We have never gone so low as to bargain with this nation's interests and we never will.

* In the new constitution, our understanding of the concept of the Turkish nation will include all of the various ethnicities that constitute Turkey."