From Turkey to forming a front against Assad 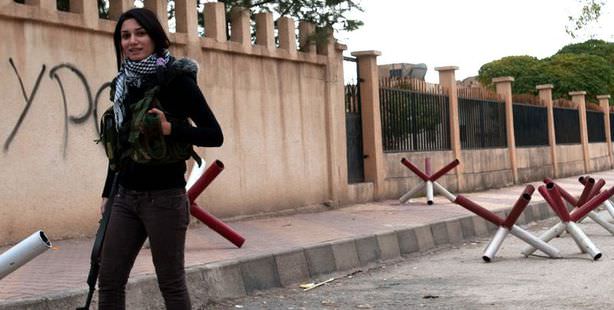 The British daily ‘The Times’ recently reported that over 1,500 PKK members have departed Turkey and crossed into Syria. According to the article, these PKK members are fighting alongside the Free Syrian Army in order to protect the Kurdish populated regions in the north.

Over 1,500 PKK members have departed Turkey for Syria and are fighting alongside the Free Syrian Army in order to protect the regions primarily in the north and northeast with a high Kurdish population. Amongst this new wave of militants are Kurdish women that are armed and prepared to fight against the Assad regime's forces.

An article published in the British daily The Times reports that according to Iraqi government sources, a high number of PKK members are departing Turkey's southeast for Syria in order to protect Kurdish regions against the Assad regime. The article, entitled 'Rebellion unveiled: Kurdish women join war on Assad', specifically hones in on Kurdish female fighters and writes. "Bearded Islamists have been startled to find themselves fighting alongside a female unit led by Ruken, an AK47-carrying commander."

The article entitled Rebellion unveiled: Kurdish women join war on Assad draws on five consecutive days of conflict between the Popular Protection Units (YPG) and the Damascus regime in the majority Kurdish Sheikh Maksud district of the northern Syrian city of Aleppo. The YPG, which is affiliated with the PKK and is considered to be the armed wing of the Democratic Union Party (PYD), had remained impartial up until the end of March. Now, fighters for the Free Syrian Army, which once fought against the YPG in the north until the two organizations signed an agreement, are now finding themselves sharing the same frontlines with modern and uncovered militant Kurdish women.

Journalist Anthony Lloyd had the opportunity to meet with 27-year-old Ruken, the commander of a female wing of fighters for the YPG, which he describes by writing, "Ruken reads Nietzsche and Aristotle, smokes Gauloises Blondes and last month she shot her first man dead with a Russian-made assault rifle. Amid an increasingly Islamicised struggle in which bearded men, religious conservatism and Islamic slogans have become the face of Syria's revolution, the 27-year-old commander of 40 Syrian-Kurd fighters in Aleppo, all of them women, is unusual in every way."

Meeting in a hair salon in Sheikh Masud, located a block away from the front line and covered with posters of PKK leader Abdullah Öcalan, Ruken says it is wrong to underestimate female militants and explains that when Free Syrian Army fighters see how she is in combat they are surprised, however end up showing her higher respect. "For me this isn't just a battle for the people but a battle for women," says Ruken.

Speaking to The Times, Halis Afrin, who is in charge of security for the YPG, explained that as a result of the talks between Öcalan and Ankara, the Syrian regime is now aware that the Middle East is changing. Afrin says that the Syrian regime is now attacking the YPG out of fear of their growing strength. The article also noted that while some Syrian Kurds are affiliated with the PKK while others are supporters of Northern Iraq's Kurdistan Democratic Party, the vast majority has expressed their intent for an autonomous Kurdish administration.